Acarbose is an orally active antidiabetic drug that acts by inhibiting carbohydrate digestive enzymes, (alpha glucosidases and alpha amylases). Through competitive and reversible inhibition of glucosidases, acarbose delays gastrointestinal digestion of carbohydrates, which in turn mitigates postprandial hyperglycemia (increase in blood glucose levels following a meal). Because its mechanism of action does not enhance insulin secretion, acarbose may be used in combination with other hyperglycemic agents, e.g. sulfonylureas, insulin or metformin, in order to enhance glycemic control (Drugs.com).

Learn more about the targets of acarbose here.

Each molecule of the maltase glucoamylase (MGAM) enzyme is made up of 1867 residues and contains two homologous catalytic subunits. The N-terminal domain (residues 1-868) is called NtMGAM  and C-terminal domain (residues 955-1867) is called CtMGAM. Both subunits carry out the same catalytic reaction - hydrolysis of α-(1,4) linked glucose units in linear oligosaccharide substrates yeilding glucose monomers.  However, they differ in their distinct specificity for varying lengths of malto-oligosaccharides (Sim et al., 2008).

Both the NtMGAM and CtMGAM domains are comprised of five major sub-domains:

The tertiary structures of NtMGAM and CtMGAM reveal a similar fold (Figure 2), however the latter has a 21-residue insert (shown in cyan, Figures 2b and 3b), and gives it a larger binding pocket to bind longer substrates than NtMGAM. 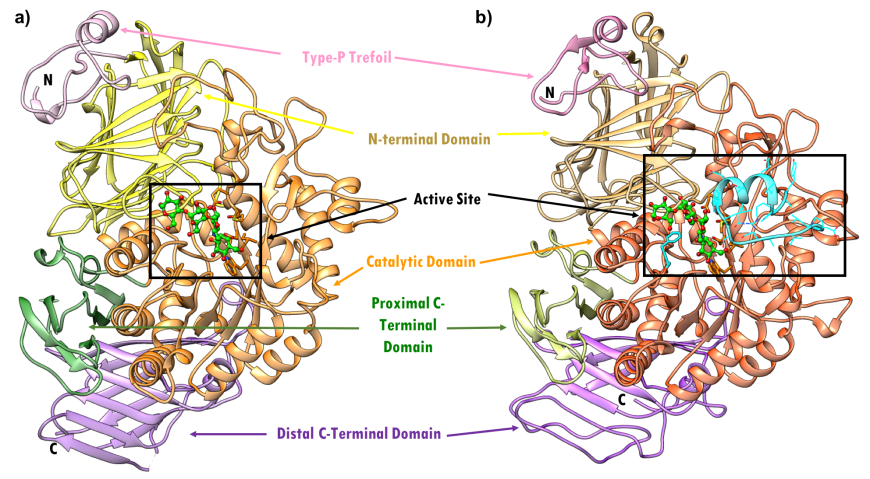 Acarbose is a substrate-like inhibitor of HPA, MGAM and SI. It has a tetrasaccharide-like structure with an acarviosine group α-linked to a maltose.  The first two rings of the non-reducing end of acarbose (also known as acarvosine) occupy the −1 and +1 sugar subsites of the active site, with the N-linked bond occupying the catalytic center.  Substrate cleavage occurs between the -1 and +1 subsites. A close up view of the active site shows acarbose as a stick figure (Figure 3).

Close examination of the structure reveals that acarbose binds to NtMGAM via extensive hydrogen bonding interactions, represented as blue lines in Figure 4a with active site residues Asp203, Thr205, Asp327, Arg526, Asp542, and His600 and surrounding water molecules. The two rings from the reducing end of acarbose make minimal interactions with active site residues. A similar hydrogen bonding network is observed (Figure 4b) between acarbose and active site residues of CtMGAM (Asp1157, Asp1279, Arg1510, Asp1526, and His1584). The difference between acarbose and a α-(1,4) linked tetrasaccharide substrate is a nitrogen atom in place of an oxygen atom. The catalytic nucleophile Asp (Asp443 in NtMGAM/Asp1420 in CtMGAM) does not interact with acarbose, whereas the same residue forms a covalent intermediate with oligosaccharide substrates and plays a major role in hydrolyzing linear oligosaccharides to monomers.  The acid/base residue Asp542 (in NtMGAM) and Asp1526 (in CtMGAM) makes several hydrogen bonds with the drug molecule.  These structural studies have revealed that acarbose acts by occluding the active sites of HPA, MGAM, and SI, preventing binding of oligosaccharide substrates, and delaying carbohydrate digestion.

Figure 4. (a) Hydrogen bonding interactions (blue lines) between acarbose (stick figure) and enzyme residues in (a) NtMGAM (PDB ID 2qmj; Sim et al., 2008); (b) CtMGAM (PDB ID 3top; Ren et al., 2011). The catalytic nucleophile Asp is labeled in red and the acid/base residue Asp in blue and shown in ball and stick representation, while other enzyme residues are shown as stick figures. The acarvosine ring occupies the subsites of the enzyme where the −1 and +1 sugars of the substrate bind.

Low oral bioavailability of the parent drug accounts for the minimal systemic effects of the drug. Acarbose is broken down into glucose, maltose, and acarvosine in the intestine. Roughly 34% of these metabolites are absorbed and removed from the blood via renal elimination. Acarbose molecules that are not metabolized simply pass through the gastrointestinal tract and are excreted.

Acarbose does not display harmful effects on cardiac health, nor is it carcinogenic (DrugBank). According to the National Institutes of Health, 2-5% of patients in a case study displayed elevated serum liver enzyme levels. The levels were three times the upper limit in these patients. However, serum enzyme levels returned to normal when acarbose therapy was discontinued and no damaging effects on the liver were observed. Following approval of acarbose, there were at least a dozen cases of clinically apparent liver injury linked to acarbose use. Adverse effects on hepatic health from administration of acarbose were unexpected and remain unexplained, since acarbose is minimally absorbed due to its oligosaccharide chemical structure (NIH).

Table 4. Drug Interactions and Side Effects of acarbose

Because acarbose is not extensively metabolized in the liver, significant drug-drug interactions are rare. However, there have been case reports documenting reduced absorption of digoxin, an antiarrhythmic and blood pressure reducer, and an increase in absorption of warfarin, a blood thinner. In combination therapy with other hypoglycemic agents, acarbose tablets did not interfere with the absorption or disposition of glyburide (sulfonylureas drug class) in diabetic patients (Drugs.com)

Developed by Bayer Health Care Pharmaceuticals Inc. and approved by the FDA on September 6, 1995, Precose (acarbose) can be used as a monotherapy or as an adjunct to other antidiabetic medications, including sulfonylureas, insulin, and metformin (Drugs.com). It has been reported that acarbose mitigates the weight-increasing effect of sulfonylureas. Precose is available in 25, 50 and 100 mg tablets.