Learn more about the targets of miglitol here.

Human maltase-glucoamylase (MGAM) enzyme is composed of 1867 residues and contains two homologous catalytic subunits. The N-terminal domain (residues 1-868) is called NtMGAM  and C-terminal domain (residues 955-1867) is called CtMGAM. Both subunits carry out the same catalytic reaction but differ in their distinct specificity for varying lengths of malto-oligosaccharides (Sim et al., 2008). In this article, we will discuss the co-crystal structure of NtMGAM complexed with miglitol.

The overall structure of NtMGAM complexed with miglitol is shown in Figure 2. The five domains are color coded. 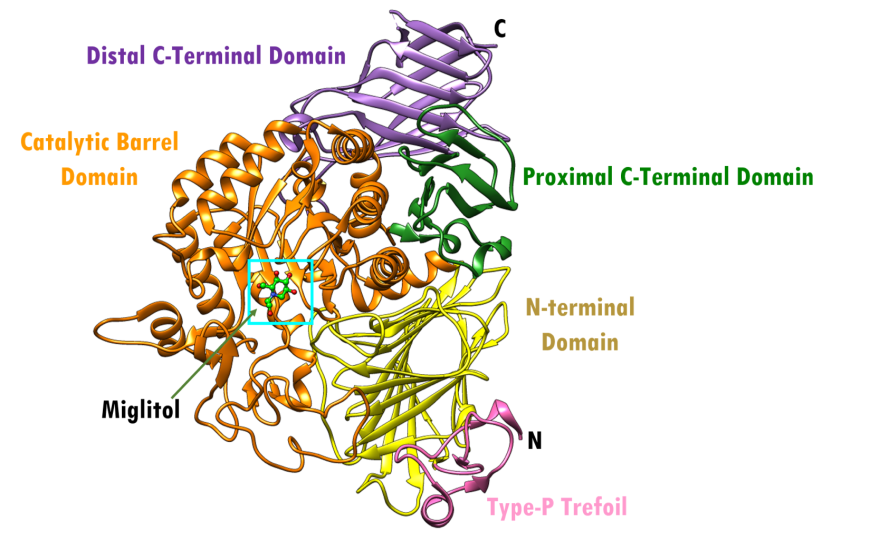 Miglitol is a small molecule that occupies the -1 sugar subsite. Substrate hydrolysis normally occurs between the -1 and +1 subsites. A close up view of the active site shows miglitols as a green stick figure (Figure 3). Several hydrophobic residues Trp441, Met444, Trp539, and Phe575, lining the subsite -1 (shown as thin stick figures in Figure 3) contribute to hydrophobic interactions with miglitol, whereas other nearby residues form a network of hydrogen bonds with the enzyme inhibitor. 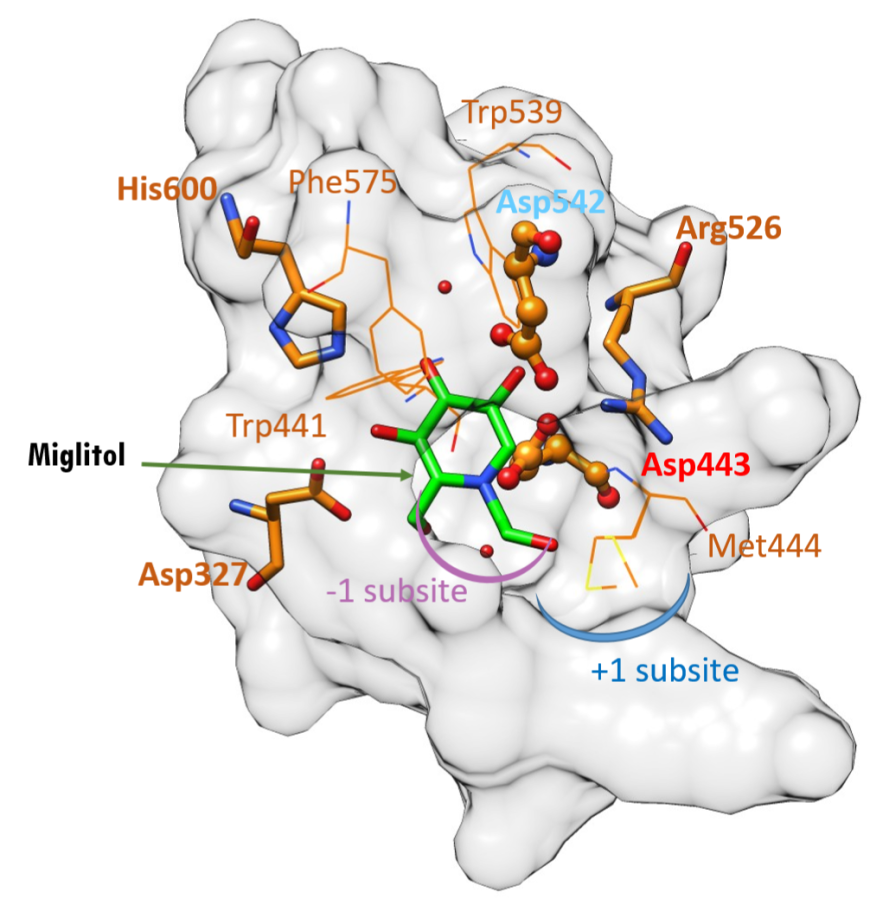 Figure 3. Close up view of the active site of NtMGAM (blue-boxed region in Figure 2). The surface of the active site of NtMGAM is shown in grey. Miglitol is shown as a stick figure, color-coded by atom type (C: green; N: blue; O: red). The sugar subsites -1, +1 are shown with purple and blue arcs respectively. (PDB ID 3l4w; Sim et al., 2010). Neighboring enzyme residues within 3.5Å of miglitol are show in brown 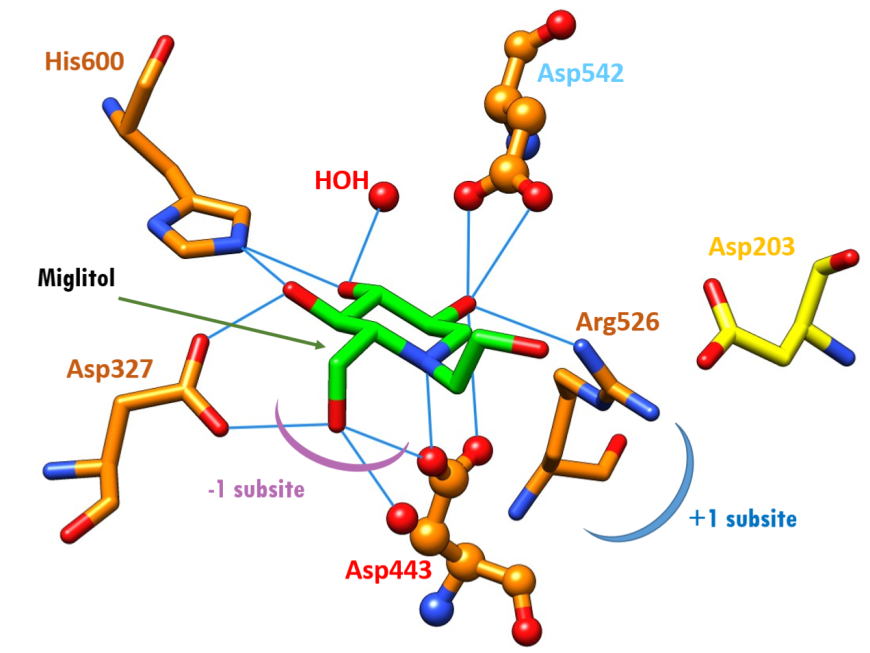 Figure 4. Hydrogen bonding interactions (blue lines) between miglitol (shown as a stick figure, color-coded by atom type - C: green; N: blue; O: red) and residues of NtMGAM. The catalytic nucleophile Asp is labeled in red and the acid/base residue Asp in blue and shown in ball and stick representation, while other enzyme residues are shown as stick figures. Miglitol occupies the −1 sugar subsite of the enzyme. (PDB ID 3l4w; Sim et al., 2010).

Miglitol remains unchanged and is eliminated by renal excretion (Drugs.com, 2016).

Miglitol is non-carcinogenic. According to the National Institutes of Health, serum aminotransferase elevations (indicators of hepatic injury) were no more common with miglitol than with a placebo. Miglitol is not extensively metabolized in the liver, so it is expected that miglitol does not impair or affect hepatic function. Since its approval and clinical use, there have been no reports of clinically apparent liver injury linked to miglitol. In addition, there were no reports of liver injury from patients who were on acarbose but switched to miglitol.

Table 4. Drug Interactions and Side Effects of Miglitol

Developed by Pharmacia & Upjohn Company LLC, and approved by the USFDA on December 18, 1996, Glyset (miglitol) is administered orally and is available in 25, 50 and 100 mg tablets (Drugs.com, 2016). Miglitol may be used as monotherapy or with other diabetic medication, such as insulin. The initial dose is 25 mg three times a day, usually taken with the first bite of each meal, followed by a gradual increase to a maximum of 100 mg. Adjustments may be necessary, depending on the patient’s HbA1c or if the patient exhibit severe gastrointestinal (GI) effects (Drugs.com, 2016). According to DrugBank, a Glyset 25 mg tablet costs $1.11; 50 mg tablet, $1.24; and 100 mg tablet $1.46.