Insulin aspart is a soluble, rapid-acting human insulin analog, used to lower postprandial blood glucose levels and is effective when administered immediately before a meal. It was designed by engineering an aspartate at position 28 in the B-chain (also written as AspB28) replacing the native proline. This analog has a shorter duration of action than injected wild-type human insulin and can achieve higher maximum insulin concentrations in a shorter time (Setter et al., 2000). Selected chemical and physical properties of insulin aspart are listed in Table 2.

In the pharmaceutical formulation, hexamers, dimers, and monomers of insulin aspart are in equilibrium (Palmieri et al., 2013). Introducing an aspartic acid at amino acid residue 28 in the B-chain changes the van der Waals interactions at the dimer interface and contributes to changes in the dissociation behavior of insulin aspart. The normal tendency to form hexamers is decreased after injection; instead, breakdown into active monomers is accelerated (Figure 2) (Setter et al., 2000). Once the insulin monomers have diffused out of the site of injection and into blood via paracellular junctions, they are carried throughout the body in blood plasma, to target tissues, principally kidney, muscle, liver, and adipose tissue. Monomers bind to the insulin receptors, which, in turn, promotes glucose uptake. 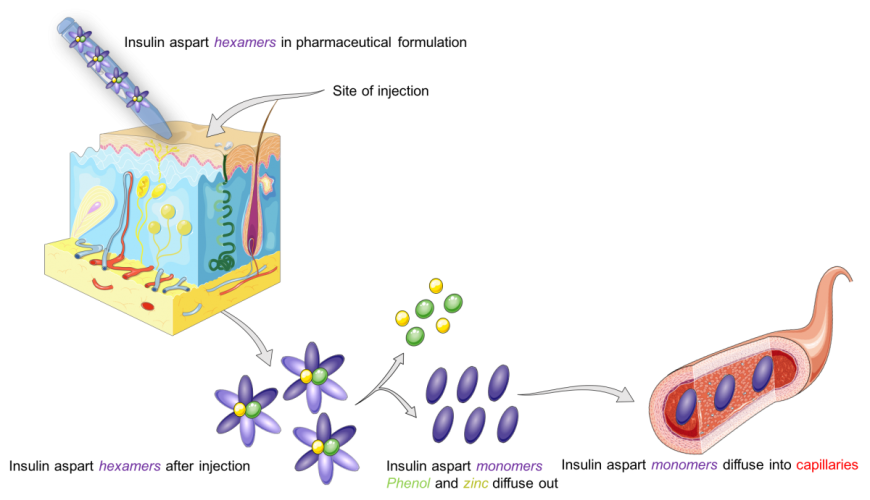 Figure 2. Image depicting subcutaneous injection to diffusion of insulin aspart in blood. Insulin aspart monomers are shown as purple ovals, while the presence of zinc and phenol are represented by ovals colored yellow and green, respectively.

Crystallographic studies have revealed that insulin aspart can exist in a T3R3 conformation, made up of TR dimers (Palmieri et al, 2013). Interactions stabilizing the various oligomeric assemblies of insulin aspart are discussed in the following paragraphs.

Insulin aspart hexamers, in the pharmaceutical formulation, are stabilized by two zinc ions and several phenolic ligands, e.g., phenol and cresol as shown in Figure 3. In the formulation, insulin aspart is thought exist in an R6-state as opposed to the crystallographic T3R3 state.

Figure 3: Insulin aspart hexamer (PDB ID 4gbc, Palmeri et al., 2013), shown in ribbon representation. a. View looking down the R3 face of the hexamer; and b. View looking from the side so that the R3 face is up and the T3 face is down. The insulin A-chains are colored blue and B-chains are colored green. The zinc, chloride, waters, and phenolic ligands are colored using CPK colors, shown in ball and stick representations, and labeled. Circles with red dashed lines represent areas of the structure expanded in Figures 4a, 4b and 5b.

Both zinc ions are coordinated three symmetry-related HisB10 sidechains in each trimer.  In the R3 trimer, the zinc adopts a tetrahedral coordination state with the chloride ion occupying the 4th ligand position.  In the T3 trimer, the zinc adopts an octahedral coordination chemistry composed of three HisB10 sidechains and three water molecules. On the R3 face of the hexamer, the zinc ion is less exposed due to the presence of the longer N-terminal α-helices in N-terminus of the B-chain  (Figure 4a), while on the T3 face the neighborhood of zinc is more exposed (Figure 4b). 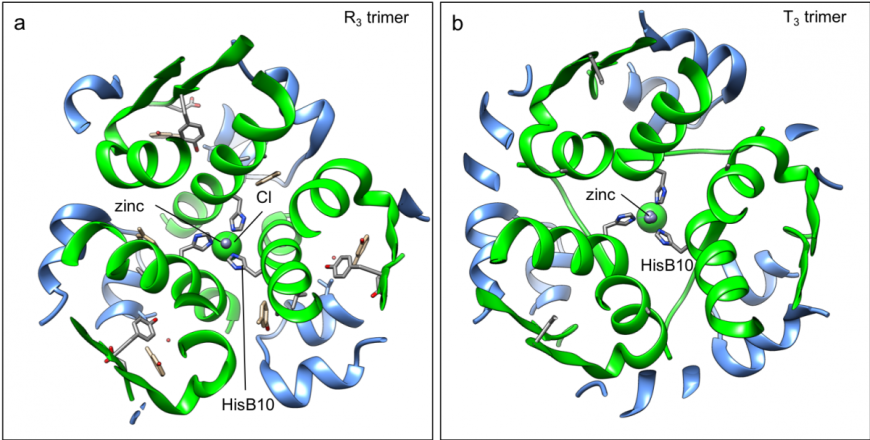 Additional interactions that stabilize the insulin aspart hexamer include, electrostatic interactions between adjacent AsnB3 residues at the R3 trimer end (Figure 5a) and phenolic ligands (cresol) at the interface of adjacent dimers. Residues lining the phenol-binding site are mostly hydrophobic in nature; however, the hydroxyl moiety is H-bonded to the A6 and A11 residues (Figure 5b). Following injection, the phenolic ligands diffuse from the hexamer, these interactions are lost.

Insulin dimers are stabilized by hydrogen bonds and van der Waals interactions, formed between the B-chain β-strands of dimerizing monomers. In wild-type human insulin, four hydrogen bonds, each ~2.9Å, stabilize the T:Rf dimers (Ciszak and Smith, 1994). In addition, van der Waals interactions between Pro28 of one monomer and GlyB23 of the dimerizing monomer also contribute to dimer formation (Figure 6a). Substituting Asp at position 28 in the B-chain enhances flexibility of the C-terminus and eliminates van der Waals interactions without affecting the hexamerizing potential in the presence of zinc and phenolic ligands (Whittingham et al., 1998). The gap between AspB28 in one chain and GlyB23 in the adjacent chain is evident in both the R and T conformations. In the T-form, the AspB28 sidechain makes hydrogen bonds with other neighboring sidechains within the same monomer, further supporting the stability of the monomer. Although the insulin aspart dimer forms the same hydrogen bonds between adjacent β-strands, reduced van der Waals interactions in the dimer interface explain ready dissociation into monomers and rapid action of insulin aspart. 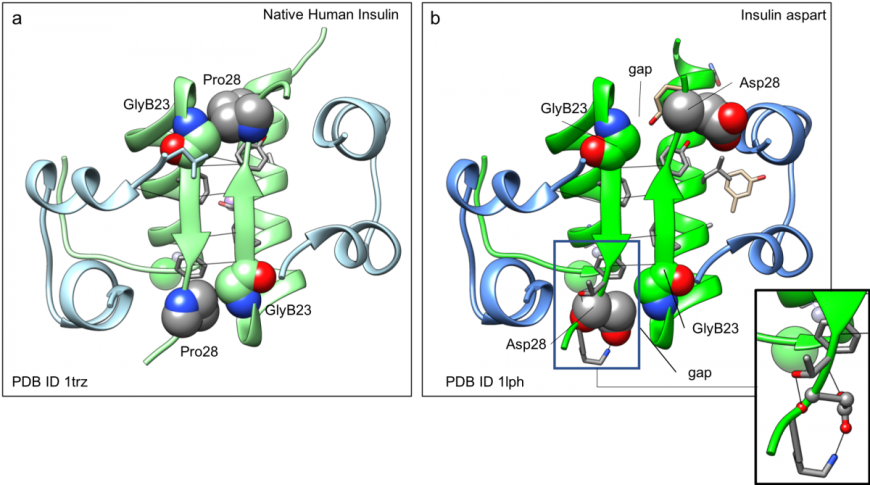 Figure 6. Interactions stabilizing dimer formation of insulin: a. wild-type human insulin (PDB ID 1trz, Ciszak and Smith, 1994); and b. insulin aspart (PDB ID 4gbc, Palmeri et al., 2013). The protein structures are shown in ribbon representation. Color coding as in Figure 3. Atoms of GlyB23, AspB28 and ProB28 residues in the B-chain are shown as spheres. Hydrogen bonds between the insulin monomer β-strands are shown as thin lines.

Table 4. Drug Interactions of Side Effects of Insulin Aspart

Developed by Novo Nordisk and approved by the US FDA in 2000, Novolog® (insulin aspart) is prescribed as a fast-acting (meal time) insulin analog that is injected into the subcutaneous layer of the body. It is available as pre-filled disposable injection pens or vials in 100 units/mL (U-100) and is administered either 5-10 minutes before a meal.  There are no generic versions of Novolog® on the market at present.