Insulin degludec is an ultra long-acting basal insulin analogue, used to maintain a constant level of blood glucose in the body for beyond 42 hours. The terminal residue of B-chain (threonine 30) is deleted and a fatty diacid modification is covalently linked to the side chain of Lys 29 of the B-chain (also written as LysB29), through a glutamic acid linker. This modification confers unique properties that prolong its mechanism of absorption into the bloodstream. Insulin degludec is the first basal insulin analog that can be formulated with a rapid-acting insulin to address postprandial requirements while maintaining  steady basal  insulin activity for over 24 hours with little variability between injections (Jonassen, et al., 2012). Selected chemical and physical properties of insulin degludec are listed in Table 2.

The pharmaceutical formulation of insulin degludec contains dimers of T3R3 hexamers (dihexamers), in complex with zinc, m-cresol, and phenol. Once injected into the subcutaneous layer, insulin degludec forms a soluble, but large multihexameric complex. As phenolic ligands diffuse out of the complex, conformational changes induce formation of large multi-hexamer chains, in the presence of zinc (Figure 2). Eventually, zinc ions dissociate from the hexamers, disassembling the complexes into their constituent dimers and monomers.  The latter species are absorbed into the bloodstream via paracellular transport through adherens junctions. The monomers bind to receptors on target cells, promoting glucose uptake. The slow and constant release of insulin degludec monomers into the blood makes it long-acting and allows maintenance of a basal level of insulin in the blood (Franek and Hak, 2015). 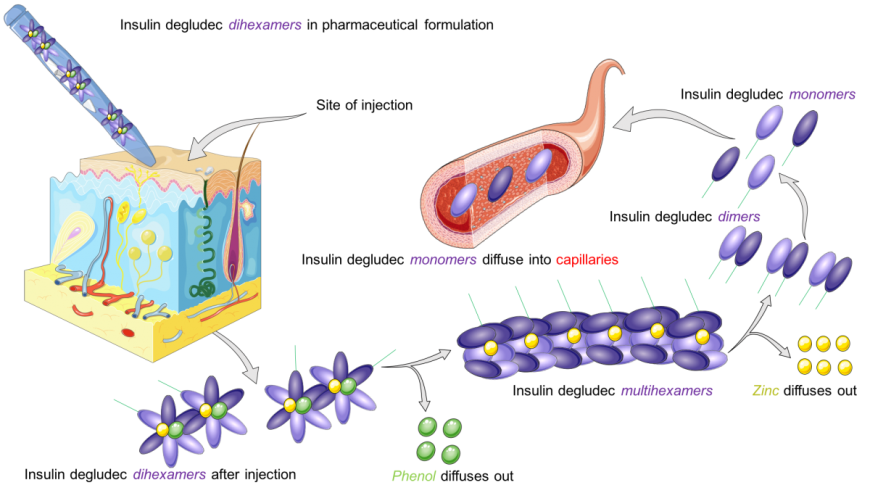 Figure 2.Image depicting subcutaneous injection to diffusion of insulin degludec in blood. Insulin degludec monomers are shown as purple ovals, while the presence of zinc and phenol are represented by ovals colored yellow and green, respectively. Adapted from (Franek and Hak, 2015).

Insulin degludec has an affinity for binding to hydrophobic domains of circulating serum albumin. The large, bulky hydrophobic tail present in insulin degludec increases its affinity for albumin. Albumin carries inulin throughout the bloodstream to its target tissues, where degludec monomers dissociate from albumin and bind to insulin receptors, principally on muscle and adipose cell surfaces. Reversible binding to albumin buffers the rate of insulin diffusion into the periphery as well as slows both renal and receptor clearance; thus, contributing, in part, to the protracted action of insulin degludec.

A noteworthy clinical implication of insulin degludec is its ability to be used in conjunction with a rapid-acting insulin analog (i.e., insulin aspart). Because of the stability imparted by insulin degludec di-hexamerization through the T3 domains, this mixture of two different insulins will not form hybrid hexamers, thus ensuring a proper kinetic profile of each component for subcutaneous absorption. Other long-acting insulins, like NPH, insulin detemir, and insulin glargine, also achieve prolonged absorption kinetics; however, the duration of time action can be less than 24 hours, thus requiring additional basal insulin injections within a day. Moreover, insulin detemir and insulin glargine cannot be mixed with rapid-acting insulins.

Crystallographic studies of insulin degludec show that under conditions comparable to the pharmaceutical formulation (comprising of zinc and phenolic ligands), insulin degludec forms dihexamers composed of T3R3 hexamers. However, in the presence of zinc, imidazole, and resorcinol degludec forms an R6 hexamer (Figure 3). Interestingly, the hexadecenoic diacid adducts linked to LysB29 were disordered in the T3R3 structure so are not discussed here. Instead, the R6 structure (PDB ID 4ajx, Steensgaard et al., 2012) is shown and discussed here.

Figure 3: Insulin degludec R6 hexamer (PDB ID 4ajx, Steensgaard et al., 2012), shown in ribbon representation. a. View looking down the R3 face of the hexamer where the hexadecenoic diacid binds; and b. View looking from the side so that the R3 face shown in panel a is on the top. The insulin A-chains are colored blue and B-chains are colored green. The zinc, phenolic ligands, and selected amino acid sidechains are colored using CPK colors, shown in ball and stick representations, and labeled. Carbons in the hydrophobic tails of the diacid is colored yellow. Labels with numbers indicate the figure numbers, showing details of that region/structural element.

The zinc ions are coordinated by symmetry-related neighboring HisB10 sidechains. In the case of one zinc in the hexamer structure (PDB ID 4ajx), the tetrahedral coordination is completed by the carbonyl end of the hexadecenoic diacid tail (Figure 4a), while in the case of the other zinc this position is occupied by an imidazole (Figure 4b). Neighboring residues in both zinc coordination spheres are similar. In a hydrophobic pocket near the zincs, phenolic ligands (resorcinols) are bound (Figure 4c). 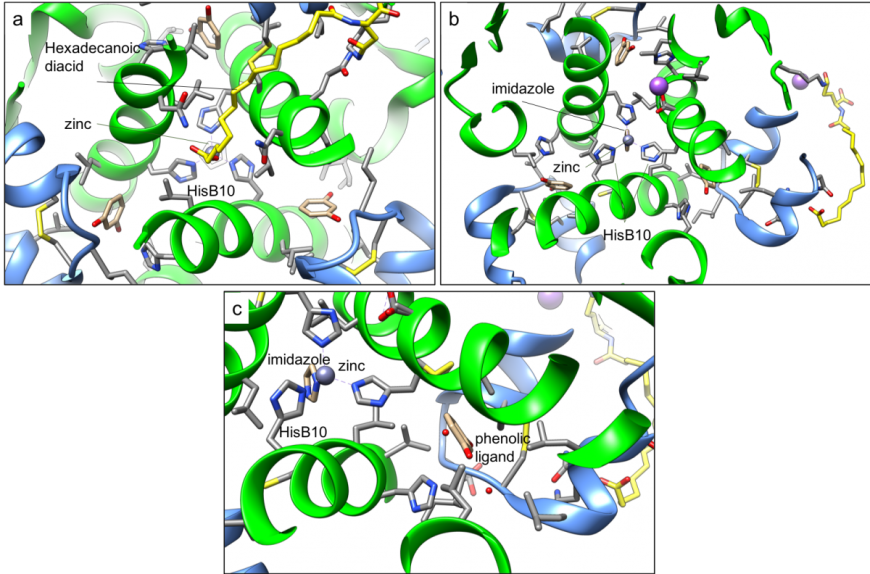 The hydrophobic tails of hexadecenoic diacids are covalently linked to the insulin degludec B-chains at the LysB29 residue through a glutamic acid linker. The hydrophobic regions of the tail interact with similar amino acid sidechains on the hexamer face (Figure 5a), while the linker and diacid ends participate in hydrogen bonding interactions (Figure 5b). In this and other structures all the hexadecenoic diacid tails could not be visualized, likely due to disorder.

Figure 5: Insulin degludec hexamer (PDB ID 4ajx, Steensgaard et al., 2012), showing: a. surface representation highlighting interactions of the hexadecenoic diacid tails. Hydrophobic surfaces are colored orange, and hydrophilic surfaces are colored blue (according to the Kyte-Doolittle scale); b. interactions of the hexadecanoic diacid 1 (see Figure 3) in stick representation with the insulin chains, shown as ribbons. Colors coding as in Figure 3.

The structural basis for insulin degludec’s prolonged activity is its formation of dihexameric and multihexameric assemblies at the injection site. While the zinc and phenolic ligand conditions forming the dihexamers may be slightly different from that used in PDB ID 4ajx, glimpses of possible interactions forming these dihexamers can be seen here. Surface view of the dihexamer shows that the hydrophobic part of the hexadecenoic diacid tail interacts with hydrophobic amino acids on the adjacent hexamer’s face (Figure 6b), while the linker residue and diacid ends participate in extensive hydrogen bonding interactions, mediated by a large number of waters (Figure 6c). Potentially these interactions can be repeated to add more hexamers to the assembly and make multihexamers. 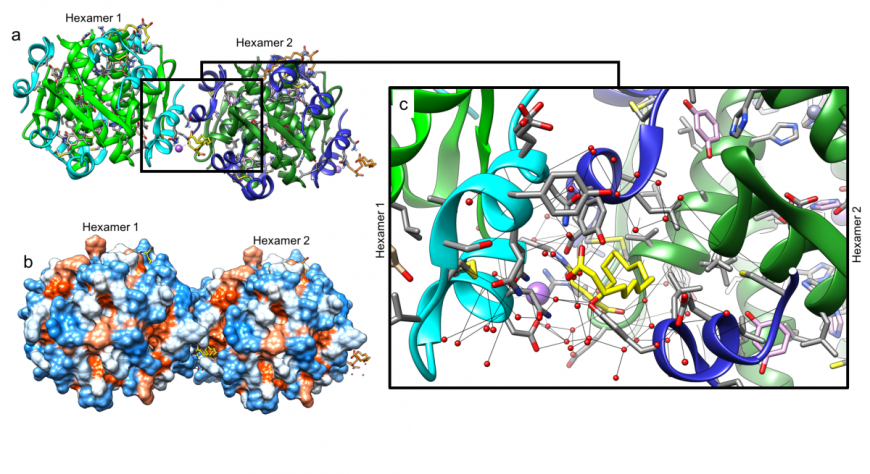 Insulin degludec readily adopts both T and R conformations, and phenolic ligands induce the transition into the R conformation. Crystal structures of the T3R3 form of degludec shows that the LysB29 attachment is completely disordered and cannot be seen (Steensgaard et al., 2012). While addition of this large, bulky and hydrophobic group does not influence the overall conformation and folding of insulin, it does have an impact on its monomer-hexamer equilibrium leading to its prolonged action.

Table 4. Drug Interactions of Side Effects of Insulin Degludec

Developed by Novo Nordisk and approved by the US FDA in 2015, Tresiba (insulin degludec) is prescribed as ultralong-acting basal insulin analogue that is injected into the body. It is available as pre-filled disposable injection pens in 100 units/mL (U-100) and 200 units/mL (U-200) and is administered once a day at any time. There are no generic versions of Tresiba available on the market at present.