Insulin detemir, also known as NN304 insulin (insulin, Tetradecanoyllysyl(B29)-desalanyl(B30), is a soluble, prolonged-acting insulin analog. The terminal residue of B-chain (threonine 30) is deleted in insulin detemir and a 14-carbon fatty acid (myristic acid) is attached to the epsilon-amine of the lysine at position 29. The presence of this fatty acid confers many advantages to insulin, most notably its ability to form large complexes upon subcutaneous injection. Selected chemical and physical properties of insulin detemir are listed in Table 2.

In the pharmaceutical formulation zinc and phenolic ligands keep insulin detemir in its hexameric form. Once injected into the subcutaneous layer, phenolic preservative rapidly diffuses into the subcutaneous area (Figure 2). The hexameric complex organizes itself into dimers of hexamers (dihexamers), mediated by the fatty acid groups attached to detemir insulin, and establishes a hexamer: dihexamer equilibrium (Poon and King, 2010). This large hexamer: dihexamer depot slowly dissociates into monomers and dimers, which can enter the bloodstream. In short, the fatty acid groups on insulin detemir allow it to self-associate, protracting its action and absorption into the bloodstream. 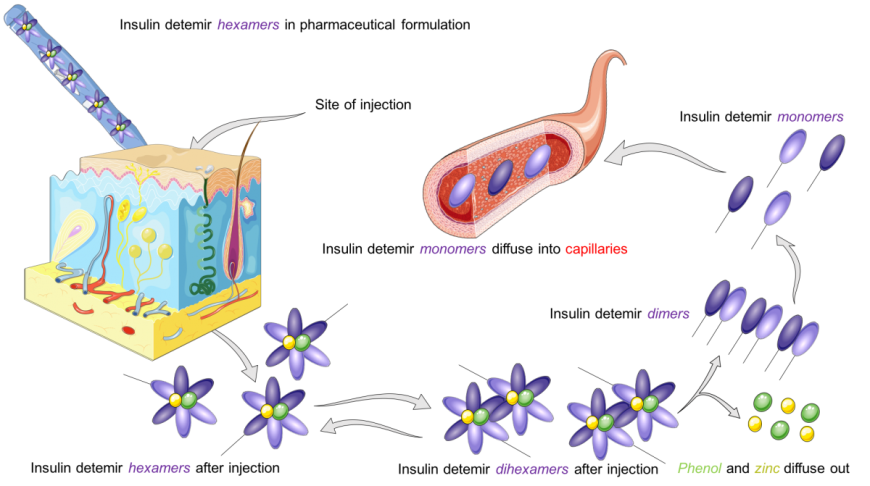 Figure 2. Image depicting subcutaneous injection to diffusion of insulin detemir in blood. Insulin detemir monomers are shown as purple ovals, while the presence of zinc and phenol are represented by ovals colored yellow and green, respectively.

Unlike NPH insulin and insulin glargine, insulin detemir is the first prolonged-acting insulin to confer less variation in absorption rate and consistent blood glucose levels. Fatty acid tails in the designer insulin mediates albumin binding, which buffers the rate of insulin diffusion into the blood as well as slows both renal- and receptor- mediated clearance, thus prolonging its action time. In circulation, 98% of insulin detemir is bound to circulating serum albumin (as monomers). Albumin carries inulin monomers through blood to its target tissues, principally muscle and adipose tissues, where insulin binds to its receptor. The concentration of free, unbound insulin is greatly reduced to only 2%, which is available for transport across capillary walls, since albumin-bound insulin is too large to be transported via paracellular junctions. It acts as a buffer in any variations of insulin release in circulation resulting in more stable plasma insulin levels (Philips and Scheen, 2006).

Crystallographic studies of insulin detemir show that it forms an R6 hexamer, in the presence of zinc and phenol (Whittingham et al., 1997). Fatty acids (myristic acid) attached to the epsilon amine of Lys in the B-chain interact with each other between the T3 domains of the hexamers to form dihexamers. Interactions stabilizing the various oligomeric assemblies of insulin detemir are discussed in the following paragraphs.

Figure 3: Insulin detemir hexamer (PDB ID 1xda, Whittingham et al., 1997), shown in ribbon representation. a. View looking down one of the R3 faces of the hexamer. The chloride ion is marked with a red Asterix for reference. b. View looking from the side so that the Asterix marked chloride ions is on the top. The insulin A-chains are colored blue and B-chains are colored green. The zinc, chloride, waters, and phenolic ligands are colored using CPK colors, shown in ball and stick representations, and labeled. The myristic acids attached to the B-chains are shown in yellow stick figures at the top and bottom of the hexamers. Labels with numbers indicate the figure numbers, showing details of that region/structural element.

Three symmetry-related His at position 10 in the B-chain (also written as HisB10) and a chloride ion (Figure 4a) tetrahedrally coordinate zinc in each trimer domain of the hexamer. The phenols are bound in hydrophobic pockets between insulin dimers (Figure 4b). Both the zinc coordination and phenolic interactions are characteristics of a wild-type R6 insulin hexamer (Smith et al., 2000). Close proximity of N-terminal helices in the R3 trimers, enables the sidechains of AsnB3 to interact with each other through electrostatic interactions (Figure 4b).

Figure 4: Insulin detemir hexamer (PDB ID 1xda, Whittingham et al., 1997), shown in ribbon representation. a. Close-up of tetrahedral zinc coordination by three symmetry-related HisB10 in the R3 trimer and a chloride ion. b. Amino acid residues lining the phenol binding site are marked with their one letter code and position on the chain. Electrostatic interactions between adjacent AsnB3 sidechains is marked by dashed black lines. Color coding as in Figure 3.

The hydrophobic, myristic acid tails are covalently attached to LysB29 in the insulin detemir B-chains. They play key roles in stabilizing hexamers and forming higher order oligomeric assemblies. The fatty acid tails occupy hydrophobic patches on either ends of the hexamer (Figure 5). On one face, the tip of each myristic acid tail alternates with the AsnB3 sidechains, while the rest of the tail is positioned in a hydrophobic track, next to the same chain’s PheB1 (Figure 5a). On the other face of the hexamer, the myristic acid chains are positioned above the respective chain’s PheB1 (Figure 5b).

Figure 5: Surface representation of insulin detemir hexamer faces (PDB ID 1xda, Whittingham et al., 1997). a. Bottom face of Figure 3b, and b. top face of Figure 3b. Hydrophobic surfaces are colored orange, and hydrophilic surfaces are colored blue (according to the Kyte-Doolittle scale). Myristic acid tail color coding and red Asterix as in Figure 3.

The structural basis for Insulin detemir’s prolonged activity is its sequestration at the injection site, in hexameric and dihexameric states. Based on the PDB ID 1xda (Whittingham et al., 1997), the myristic acid tails interact with hydrophobic amino acid sidechains at the interface of two hexamers and facilitate the detemir hexamers to stack on each other to form dihexamers (Figure 6). Although these hydrophobic interactions do not interfere with insulin assembly and function, they can potentially reduce the dissociation rate into monomers, extending the hormone’s time action. 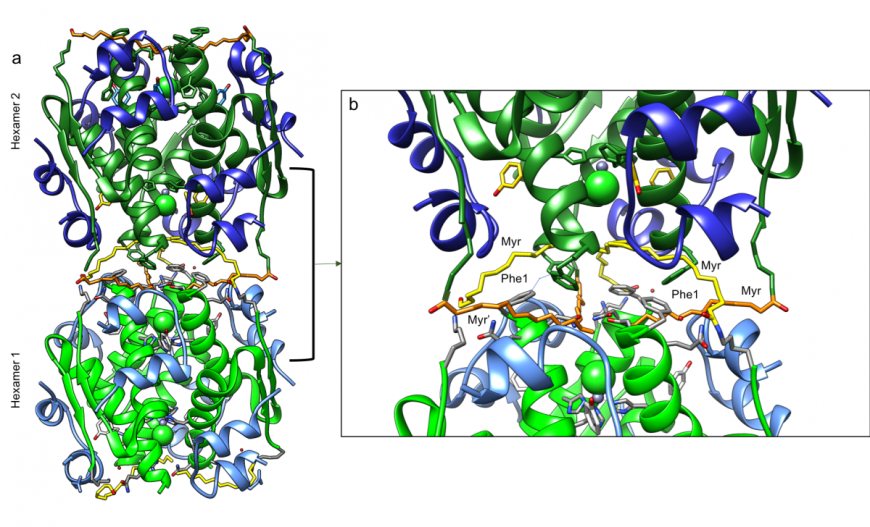 Figure 6: Insulin detemir dihexamer (PDB ID 1xda, Whittingham et al., 1997), shown in ribbon representation. a. Two hexamers are shown – hexamer 1 is colored as in figure 3, while hexamer 2 is colored in darker shades of the same colors. b. Close-up of interactions stabilizing the dihexamer formation. Color coding as in Figure 3.

Interactions of the myristic acid tails at the hexamer faces, seen in the PDB ID 1xda, display some disorder. This may be reflective of the equilibrium between monomers, hexamers, and dihexamers of insulin detemir. When not interacting with hydrophobic amino acids at the hexamer ends, the myristic acid tails bind albumin. The structure of a detemir: albumin complex is currently not available in the PDB.

Table 4. Drug Interactions and Side Effects of Insulin Detemir

Developed by Novo Nordisk and approved by the US FDA in 2005, Levemir® (insulin detemir) is prescribed as a long-acting basal insulin analog that is injected into the body. It is available as a pre-filled disposable pen and in a vial that can be injected once daily with an evening meal or at bedtime, or twice daily in the morning and evening. The evening dose can be given with the evening meal, at bedtime, or 12 hours after the morning injection. Levemir® underwent an open-labeled, randomized, parallel study with NPH insulin to test its efficacy and safety (accessdata.fda.gov).