Congratulations to the 2018 Winners:

In this challenge, students were asked to tell a story that communicates 2 things:

Figure 1 presents main classes of antibiotics and their target protein/molecule organized by the biochemical process that they interrupt in bacteria. In this video challenge, we will be focusing only on the action of and resistance to the beta-lactam class. 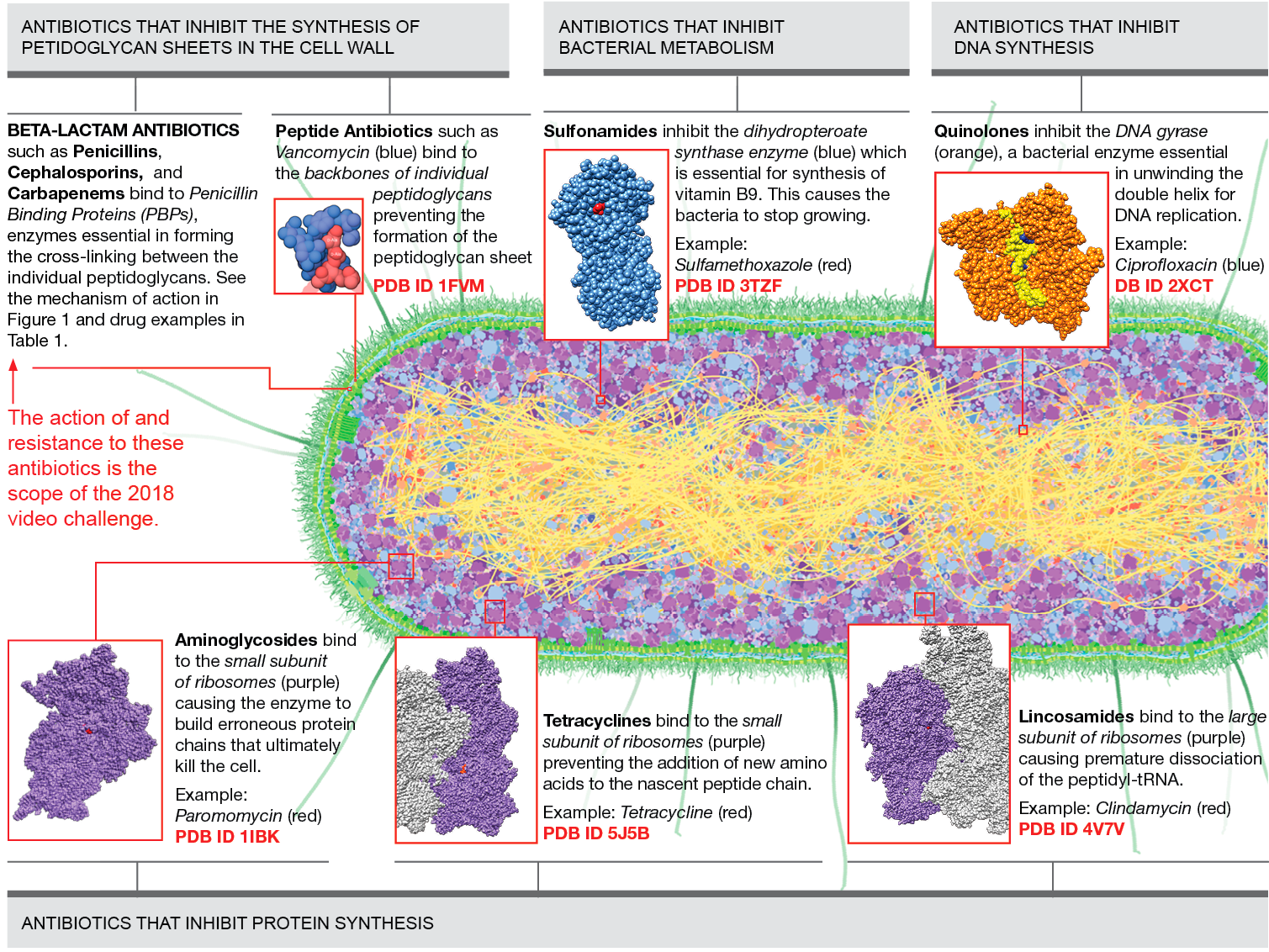 Bacteria protect themselves from osmotic pressure by building multiple layers of peptidoglycans. By the way the peptidoglycans are organized, we can distinguish between 2 types of bacteria: Gram-positive and Gram-negative. Gram-positive bacteria build a thick glycan lattice on the outside of the lipid bilayer membrane, while the Gram-negative bacteria build a thinner layer of peptidoglycan sheets in between 2 lipid bilayer membranes (Figure 2a ). Peptidoglycan monomers are synthesized in the bacterial cytosol and each consists of two sugars connected to a short chain of amino acids ending with two D-alanines. The peptide has also a pentaglycine bridge extending to the side (Figure 2b).

Once synthesized, the monomers are moved across the cell membrane where they are inserted into the existing peptidoglycan sheet. First, the sugars are assembled into chains, which are then crosslinked via the pentaglycine bridges. These processes are catalyzed by enzymes called penicillin-binding proteins (PBPs). Most of them have a DD-transpeptidase domain that is responsible for the crosslinking of peptidoglycans using a reactive serine residue in the active site (Figure 2c). The serine cleaves the terminal D-alanine and connects the penultimate D-alanine to the pentaglycine bridge of another glycan (Figure 2d).

In the face of overuse and misuse of antibiotics, new strains of bacteria have emerged that can proliferate even in the presence of the newest antibiotics. The resistance to beta-lactam antibiotics is possible due to 2 mechanisms:


There are 2 ways in which the resistance genes can be passed on: