Congratulations to the 2019 Winners:

The Criminal Case of the Aminoglycoside Misuser

The Three Little Bacteria and the Big Bad Tobramycin

In this challenge, students were asked to tell a story that communicating 2 things:

I. What are antibiotics?

Figure 1 presents main classes of antibiotics and their target protein/molecule organized by the biochemical process that they interrupt in bacteria. In this video challenge, we will be focusing only on the action of and resistance to the aminoglycoside class. 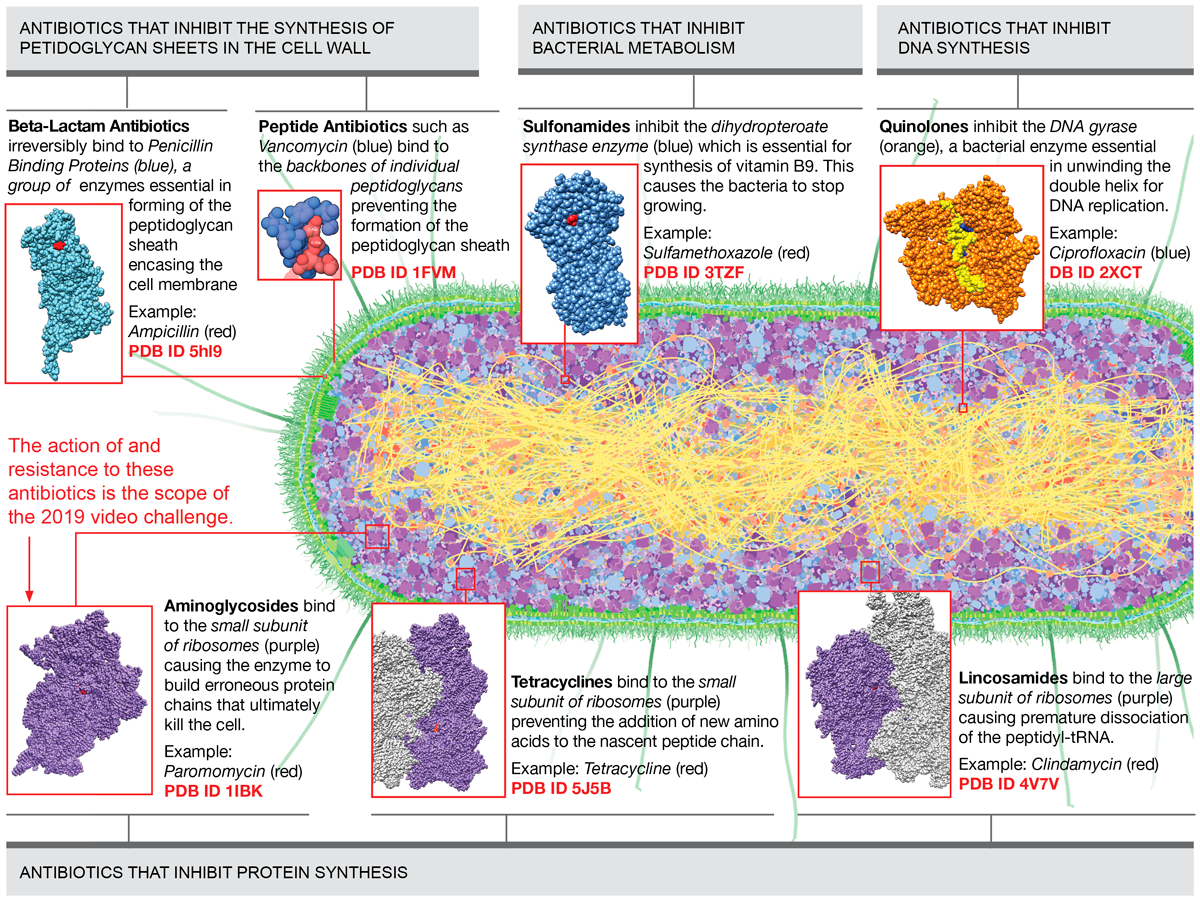 The aminoglycoside antibiotics are made by some bacteria to protect themselves from competing bacteria. They are particularly effective because they are very specific: they attack bacterial ribosomes, corrupting protein synthesis in the bacterium, but they don't attack the ribosomes of many other organisms, including our own ribosomes.

Ribosomes are the molecular machines that build new proteins based on the genetic information carried in the messenger RNA. Ribosomes are made up of multiple protein chains and rRNA that form the small and the large subunits. To learn more about the ribosomal subunits, read the Molecule of the Month on the topic.

Figure 2 shows eukaryotic and bacterial ribosomes drawn to scale and highlights the key differences in the nomenclature of their key components. 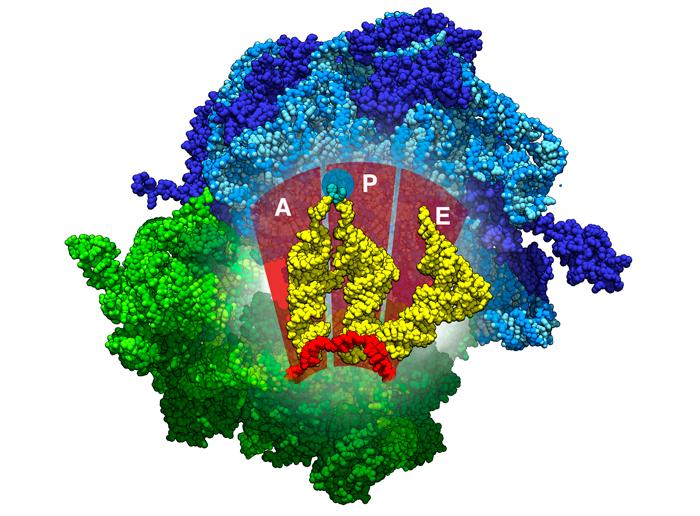 Location of the A, P, and E binding sites inside ribosomes. tRNAs are shown in yellow, the mRNA in red, the beginnings of the polypeptide chain in aqua. PDB ID 4v5d

Despite structural differences, the ribosome in bacteria and prokaryotes follow the same steps in protein synthesis. Once the messenger RNA and a special initiator tRNA (different for prokaryotes and eukaryotes) bind to the smaller subunit of ribosomes, both subunits come together, creating the enzymatic environment for creating new protein chains. The stages of protein synthesis are described in the Molecule of the Month on Ribosome.

The ribosomes have 3 binding sites for the tRNA: A (acceptor site), P (peptidyl site), and E (exit site). Figure 3 shows the locations of these sites inside the ribosomes. The A (acceptor site) site is where the a tRNA carrying a matching codon to mRNA binds. During this step, the ribosome uses several interactions to test this pairing, ensuring that the base pairing is correct. You can explore these interactions in 3D in the Exploring the Structure section, in the Molecule of the Month on Ribosome.

Another mode of action for the aminoglycoside antibiotics is binding to the large subunit of the ribosome and causing problems at the end of protein synthesis, blocking the recycling of ribosomes after they are finished making a protein. You can explore this process in the Structural Biology Highlights article Antibiotics and Ribosome Function.

Aminoglycoside antibiotics are used mainly to treat infections caused by gram-negative bacteria in a clinical setting.


Table 1: Examples of Aminoglycoside Antibiotics and PDB structures with the antibiotic bound

In the face of overuse and misuse of antibiotics, new strains of bacteria have emerged that can proliferate even in the presence of the newest antibiotics. There are multiple ways the bacteria adapt to develop resistance against the aminoglycoside antibiotics. Of current clinical prominence are the following three molecular mechanisms:

There are two ways in which the resistance genes for each of these mechanisms can be passed on: via Chromosome, where the gene is transferred from generation to generation (vertical transfer) and via a plasmid that can be passed from bacterial species to species (horizontal transfer).

Aminoglycoside modifying enzymes alter the structure of antibiotics directly so that they can’t attach to their target. They are a large family containing three subclasses based on the type of modification that they apply to the the antibiotic:

O-nucleotidyltransferase (ANT):
these enzymes add a nucleotide to the drug

N-acetyltransferases (AAC):
these enzymes add an acetyl group to the antibiotic

O-phosphotransferase (APH):
these enzymes connect a phosphate to the drug

The ribosomal methyltransferases modify ribosomes enzymatically by adding methyl groups to a nucleotide on the 16S rRNA in the aminoglycoside binding site. This does not affect the function of the ribosome, but prevents the antibiotic from binding.


3. Efflux pumps that remove the antibiotics from the bacterial cell

Multidrug resistance transporters or efflux pumps find drugs that try to gain entry through a cell membrane and they transport them back outside.