In this activity you will make a paper model of a biological molecule - tRNA. You can use an online interactive display of tRNA's atomic model and the paper model to learn about the structure and function of this molecule. The activity is presented in 3 sections:

2. Build a Paper Model of tRNA

Use this PDF to build a paper model of the tRNA. As you build the model, you will see the primary structure, secondary structure and a simplified version of the tertiary structure of tRNA. 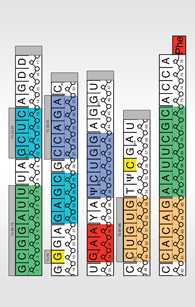 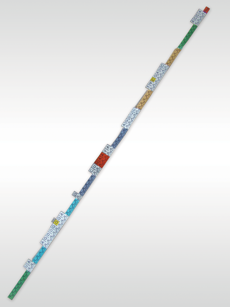 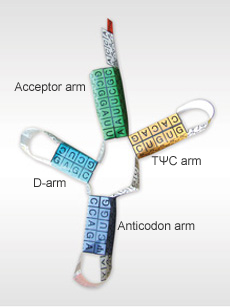 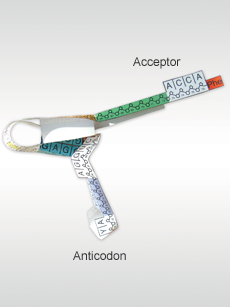 The tRNA is a polymer which has alternating sugar and phosphate units forming a backbone for the entire molecule. Each sugar in the backbone has a base attached to it which in turn interacts with other bases in the molecule.

The yeast phenylalanine tRNA has 76 bases which provide points of interaction between various parts of the molecule. In addition to standard bases such as adenine (A), cytosine (C), uracil (U) and guanine (G), tRNA has several modified bases such as pseudouridine (Ψ) and ribothymidine (T). These modifications are a hallmark of tRNA molecules and have been studied very carefully.

Although many of the details are still unknown, the modified bases are thought to tune the function of the tRNA, for instance, in optimizing the interaction of the anticodon with the mRNA codon.

Follow the instructions in the slide show to create your own model.

For additional help, a video demonstrating how to build this tRNA model is on YouTube.

3. Explore the Atomic Structure of tRNA

The atomic structure of tRNA can be visualized using coordinates from the Protein Data Bank. Here the structure from PDB ID 4tna is shown in a Jmol interactive view. Use the buttons to change the color and representation, and look closely at a few unusual representations between bases. For example bases C13, G22, m7G46 display a base triplet interaction (highlighted here as 13-22-46). Another unusual interaction occurs where base G57 stacks between the base pairs G18:(Ψ)55 and G19:C56 (highlighted here as 18-19 and 55-57).