The enzyme aconitase is a key player in the central pathway of energy production. As part of the citric acid cycle, it converts citrate into isocitrate.

The animation shows histidine acting as an acid protonates the hydroxyl on the substrate, allowing it to leave as a water molecule. Serine then acts as a base by extracting a hydrogen atom from the opposite side of the substrate, forming the intermediate cis-aconitate. Cis-aconitate then flips upside down, and the complementary hydration reaction is performed.

Histindine grabs a hydrogen atom from a passing water molecule, placing the resulting hydroxyl group back onto the substrate. Serine then returns its hydrogen atom and the final product isocitrate is released.


Excerpt from video How Enzymes Work. 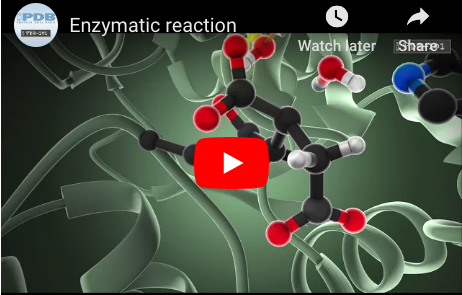