Molecule of the Month: Hydrogenase 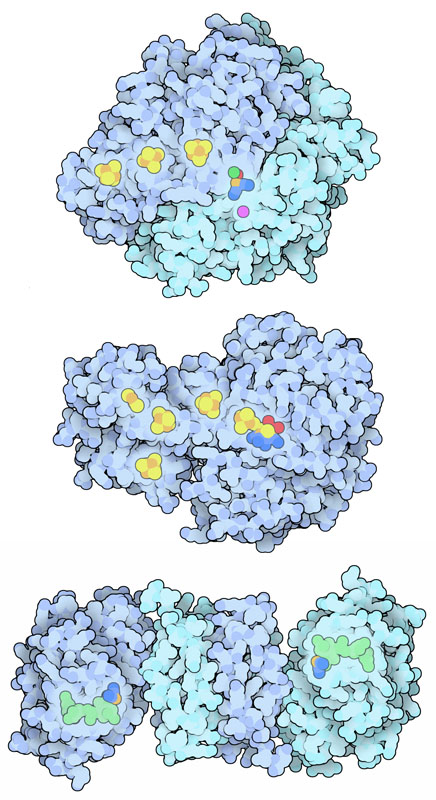 Hydrogen gas is an unusual substance. Normally, it is stable and must be coaxed with powerful catalysts to enter into chemical reactions. But when mixed with oxygen, a tiny spark will set off an explosive chain reaction. Hydrogen gas holds great promise to be the greenest of green energy sources. It has many advantages: compared with many fuels, it releases a lot of energy for its weight, and the reaction forms only energy and pure water. It has substantial disadvantages, however. It is dangerous to store, and it is difficult to perform the reaction in a controlled, non-explosive manner. Currently, the fuel cells being developed for use in hydrogen-powered vehicles use costly platinum catalysts to perform this reaction. Researchers are now looking to nature for other alternatives.

The three types of hydrogenases use different combinations of metal ions and cofactors to activate hydrogen. The active sites of nickel-iron and iron-iron hydrogenases are buried deep within the proteins. The reaction begins when hydrogen diffuses through little channels into the active site. First, the enzyme breaks hydrogen into two pieces: a proton (H+) and a hydride (H-). Then, the electrons are stripped off of the hydride and transferred down a string of electron carriers, and the two protons are simultaneously shuttled to the surface. Iron hydrogenases are slightly different: a special cofactor binds in the active site at the beginning of each reaction, and this cofactor accepts the hydride when the hydrogen molecule is split.

The active site complexes are an unusual combination of metal ions and strange molecules such as cyanide and carbon monoxide, held in place by cysteine amino acids. These complicated active sites are constructed by a dedicated set of maturation enzymes. For instance, the nickel-iron hydrogenases require at least seven enzymes, powered by GTP and ATP, to build their active sites. One of these enzymes acts as a chaperone, bonding to a key cysteine in the active site and wrenching the protein open to make it accessible to the other enzymes. They load in metal ions and add the cyanide and carbon monoxide ligands. Finally, the chaperone protein releases the cysteine and the mature hydrogenase snaps shut around its new active site. 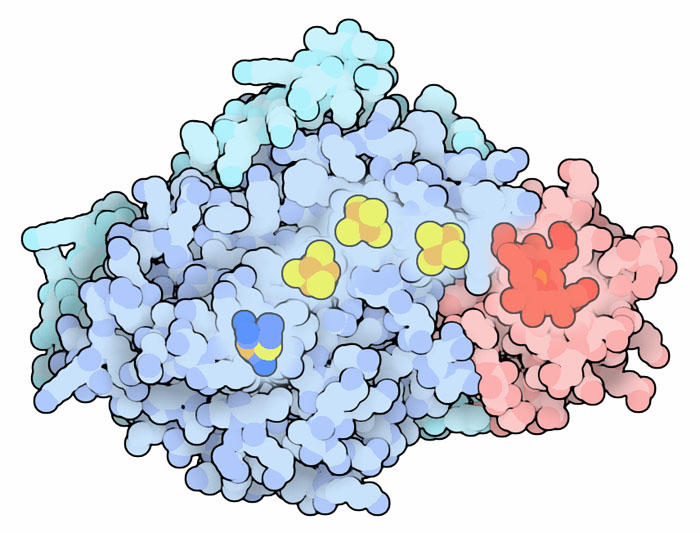 Hydrogenases need a place to dump all the electrons extracted from hydrogen. In some cases, these electrons are transferred to electron transport proteins such as cytochromes. In this structure solved by NMR spectroscopy (PDB entry 1e08 ), an iron-iron hydrogenase (blue) is caught in the act of transferring its electrons to a cytochrome (pink). To look at this complex in more detail, take a look at the page at Proteopedia. 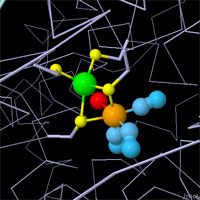 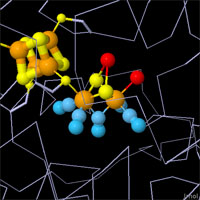 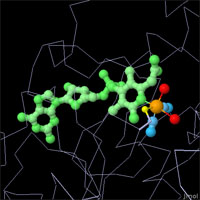 X-ray crystallography has revealed the active sites of all three types of hydrogenases, but mysteries still remain. Hydrogen is too small to be seen in most crystallographic experiments, so other methods must be used to discover the specifics of the reaction. The active sites are all different, but they have compelling structural similarities. All are centered around an iron atom with several unusual ligands, such as cyanide ions and carbon monoxide. Each has another metal ion or cofactor to assist the iron atom with the reduction/oxidation reaction. And they all use cysteine amino acids to hold everything in place. Click on the images above to take an interactive look at each active site.

You can get an up-to-date list of proteins related to Hydrogenase by clicking on any of the accession codes in this Molecule of the Month, and then using the tab named "Sequence Similarity" at the top of the page.

doi:10.2210/rcsb_pdb/mom_2009_3
About Molecule of the Month
The RCSB PDB Molecule of the Month by David S. Goodsell (The Scripps Research Institute and the RCSB PDB) presents short accounts on selected molecules from the Protein Data Bank. Each installment includes an introduction to the structure and function of the molecule, a discussion of the relevance of the molecule to human health and welfare, and suggestions for how visitors might view these structures and access further details.More