Molecule of the Month: Importins

Importins deliver proteins into the nucleus through the nuclear pore complex

Complex of importin-beta (blue), importin-alpha (green), and the cargo nucleoplasmin (yellow).
Download high quality TIFF image
Inside your cells, the process of protein synthesis is separated into two compartments. The first half of the job, when DNA is transcribed into RNA, is performed in the nucleus. The second half is then performed outside the nucleus, when ribosomes translate the RNA to construct proteins in the cytoplasm. This separation requires a continuous traffic of molecules: new RNA molecules must be transported out of the nucleus and nuclear proteins, such as newly-synthesized histones or polymerases, must be transported back into the nucleus. Huge tube-shaped nuclear pores act as the highway connecting the nucleus and the cytoplasm, and importins and exportins (collectively known as karyopherins) ferry molecules back and forth through the pore.

Importins transport thousands of different proteins into the nucleus to perform the many tasks of storing, reading, and repairing the genome. However, it would be far too costly to design a special importin to carry each one inside. Instead, many nuclear proteins are built with a special tag—a short sequence called the nuclear localization signal—that tells the transport machinery to carry the protein into the nucleus. Importins recognize this signal, bind to the protein, and transport it through the nuclear pore.

The importin complex shown here (built from three separate PDB entries) transports proteins with nuclear localization signals. At the top in blue is importin-beta (PDB entry 1qgk ). It is the engine of the complex, recognizing nuclear pores and moving through them. It wraps around the end of importin-alpha, shown at the center in green (PDB entry 1ee5 ). Importin-alpha is an adapter molecule that connects importin-beta with the cargo. In this picture, the cargo is nucleoplasmin, shown at the bottom in yellow (PDB entry 1k5j ), a chaperone protein that is important in nucleosome assembly. Notice how the extended nuclear localization signal of this cargo is gripped by importin-alpha. 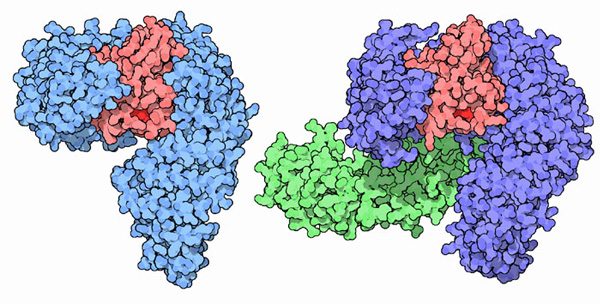 Once the importin-beta/importin-alpha/cargo complex gets inside the nucleus, the cargo must be released and the importins must be recycled back to the cytoplasm. The Ran protein, shown here in light red, is responsible for releasing the cargo. It binds to importin-beta and causes a significant change in shape, leading to the release of importin-alpha and the cargo. Then, the complex of importin-beta and Ran (shown on the left, PDB entry 2bku) travels back through the pore. Outside, a GTP molecule in Ran (shown in bright red) is cleaved and the Ran dissociates, leaving importin-beta ready to carry the next cargo protein inside. Importin-alpha can't get back to the cytoplasm by itself, so it gets some help from CAS (a nuclear export factor), shown here on the right in purple (PDB entry 1wa5 ). CAS is similar to importin-beta, but moves through the nuclear pore in the opposite direction. It binds to importin-alpha and Ran and carries them out of the nucleus. Then, a similar cleavage of the GTP in Ran releases importin-alpha for another round of transport. 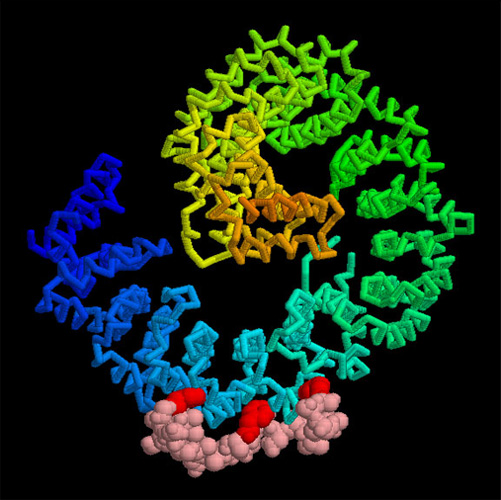 The actual mechanisms that importins use to pull molecules through the nuclear pore are still a subject of active debate, but PDB entry 2bpt gives some hints of how it might be done. The thousands of proteins that make up the nuclear pore are covered with special amino acid sequences that are flexible and that contain many phenylalanines. One side of importin-beta binds to these special sequences. The structure shown here includes the full importin-beta (in rainbow-colored cylinders) and a few short pieces from the nuclear pore proteins (shown in spheres at the bottom, with the phenylalanine amino acids in red). Notice that the phenylalanines bind in pockets on the outer surface of the importin. Importin-beta may jump from site to site through the nuclear pore, guided by these special sequences.

As you take a look at these structures yourself, take a moment to explore the unusual fold of the chain. Importin-beta is folded like a spring, which then wraps into a big spiral that traps its binding partners inside.

doi:10.2210/rcsb_pdb/mom_2007_1
About Molecule of the Month
The RCSB PDB Molecule of the Month by David S. Goodsell (The Scripps Research Institute and the RCSB PDB) presents short accounts on selected molecules from the Protein Data Bank. Each installment includes an introduction to the structure and function of the molecule, a discussion of the relevance of the molecule to human health and welfare, and suggestions for how visitors might view these structures and access further details.More