Geis illustrates the structure of bovine trypsin, an enzyme that breaks down proteins, which was first revealed by X-ray crystallography in 1971 and further explored in 1974 (Krieger et al., 1974). This illustration was originally published in Scientific American (Stroud, 1984). Trypsin is a protease, an enzyme that catalyzes cleavage of polypeptide chains (Stroud, 1984). Geis' sketch depicts the structure with a ball-and-stick model and displays the sidechains of aspartic acid (Asp102), histidine (His57), and serine (Ser195), known as the catalytic triad. 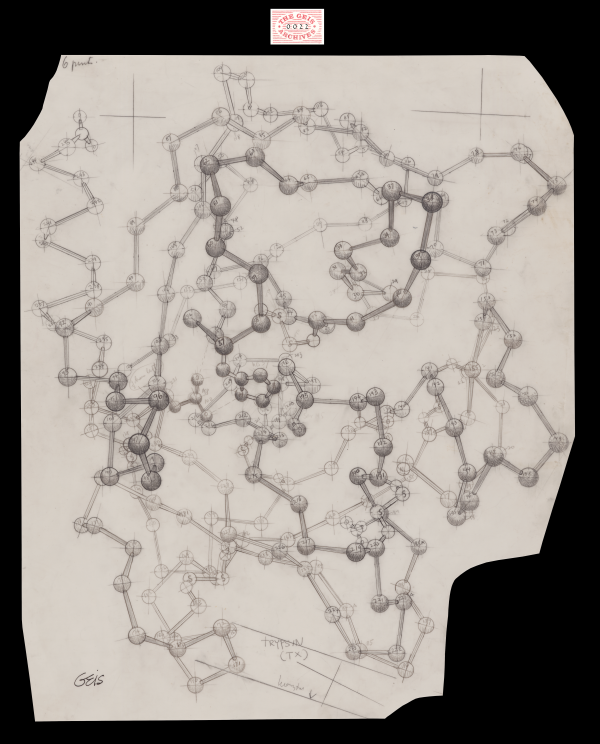 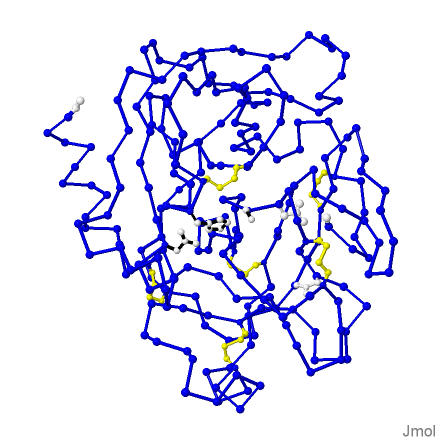 Molecule of the Month: Trypsin

Trypsin is found in the cells of the exocrine pancreas (Goodsell et al., 2015). It is released into the pancreatic duct and is subsequently secreted into the duodenum of the small intestine via the common bile duct. It breaks down proteins that have been irreversibly unfolded by hydrochloric acid into fragments consisting of a few amino acids. Serine is the amino acid in trypsin that is most important for its enzymatic function, hence the name serine proteases for this class of enzymes. Trypsin recognizes and cuts next to lysine and arginine. Within the exocrine pancreas, trypsin exists as an inactive pre-enzyme, known trypsinogen. The presence of an extra protein chain in trypsinogen prevents the protein from working as protein catalyst. When trypsinogen is secreted into the intestine, enteropeptidase cleaves the extra protein chain and converts trypsinogen into trypsin, thereby activating its enzymatic function. The end of the new chain tucks itself into the protein, stabilizing the active form of the enzyme. Trypsin is regulated by an additional protein, known as pancreatic trypsin inhibitor, which binds to the active site of trypsin and prevents unwanted catalytic activity outside the intestine.

Central to the enzymatic function of this protease, is the catalytic triad composed of serine, histidine, and aspartate (Goodsell et al., 2015). These three residues form the charge relay system (shown in green in static rendition), which is responsible for removing a hydrogen atom from the hydroxyl group found in the R-group of serine, creating a negatively charged oxygen and consequently allowing the newly reactive serine to cleave a protein chain at the site of a lysine or arginine. The activation domain of trypsin consists of the region between Cys191 and Cys220 (this region is disordered in the X-ray structure of trypsinogen). The surface representation of trypsin reveals a deep invagination, at the bottom of which lies a conserved, negatively charged aspartic acid (Asp189) (shown in yellow in static rendition). Trypsin specificity for cleavage adjacent to positively charged lysine or arginine residues derives from the favorable electrostatic interaction made between the substrate sidechain and Asp189 lying at the base of the invagination or specificity pocket. Once the substrate polypeptide chain is bound to the active site via this primary anchor, the serine sidechain supports nucleophilic attack of the adjacent peptide bond and cleavage ensues.