Geis illustrates the structure of an antibody, immunoglobulin G (IgG), which was first revealed by X-ray crystallography in 1977 (Silverton et al., 1978). His depiction was published in Biochemistry by Donald Voet and Judith G. Voet as Figure 34-15 on page 1099 of the textbook (Voet & Voet, 1990). 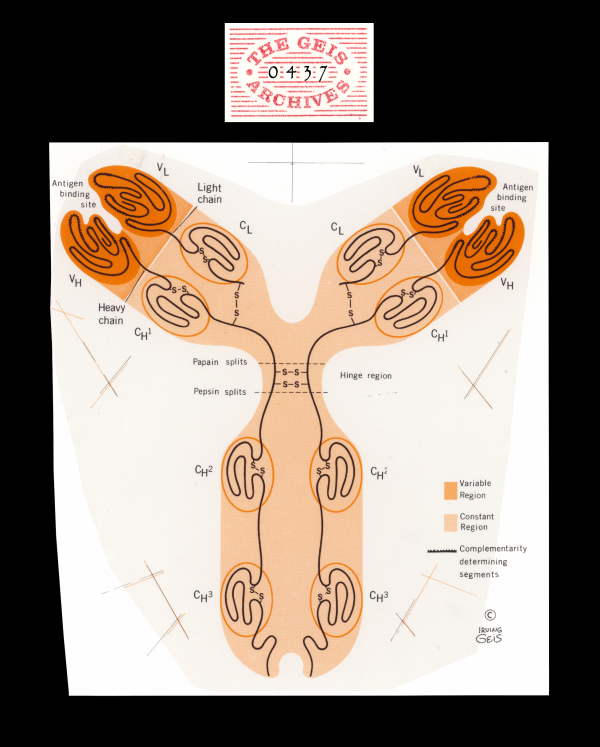 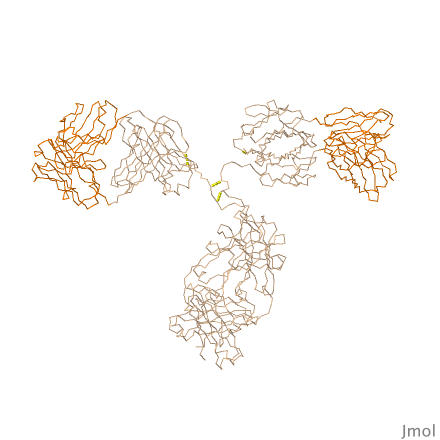 Molecule of the Month: Immunoglobulin G

Antibodies are capable of binding tightly to the surfaces of both large and small molecules (Goodsell, 2001). They serve to protect humans and other animals from foreign invaders, such as bacteria and viruses, by circulating throughout the bloodstream. At any given time, the body can call on about 100 million different types of pre-existing antibodies to fight an infection.

The Y-shaped structure of an antibody consists of two arms, each of which displays a binding site for an antigen (Goodsell et al., 2015). These arms are connected to the central domain of the antibody via a flexible polypeptide chain segment

IgG is the most common type of antibody. It is a two-armed antibody consisting of two identical light (short) chains (yellow in static image) and two identical heavy (long) chains (red and pink in static rendition) (Goodsell, 2001). The antigen binding sites found at the tips of each arm are formed by approximation of the variable regions of the heavy and light chains. The remaining portions of both arms and the Fc region (composed of the two long heavy chains) are characterized as the constant region (shown in red and pink in static rendition). Disulfide bridges link the two polypeptide chains together.