While symptoms may be indicative of disease, definitive diagnosis requires one or more of the following blood tests:

The three different measurements described here may be used to diagnose diabetes (Table 1).

How to Determine Blood (or Plasma) Glucose Levels?

Measuring blood glucose concentrations is critical for diagnosis and monitoring of diabetes. This is usually done using a glucometer with test strips. A drop of blood is placed on the glucose test strip and exposed to a fixed quantity of an enzyme, glucose oxidase (shown in Figure 1), for a finite period of time. Glucose oxidase acts as a biosensor and oxidizes glucose to generate products (gluconic acid and hydrogen peroxide). In older models, the amount of hydrogen produced was measured by a color change reaction to indicate the glucose concentration. In modern glucometers, the hydrogen peroxide interacts with a mediator to transfer electrons to a microcircuitry included in the test strip to give a reading of blood glucose concentration. In order to get consistent glucometer readings, the test strips should be stored away from moisture and extremes of temperature so that the glucose oxidase coated on the test-strip is not denatured and rendered non-functional. 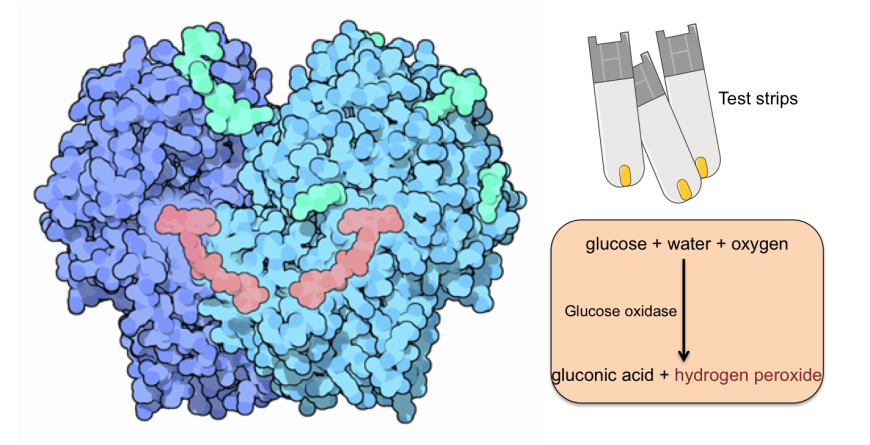 Hemoglobin A1c or Hb A1c
Hemoglobin is a protein found within red blood cells that transports oxygen throughout the body. Prolonged exposure to high levels of glucose leads to glycation of proteins that are exposed to blood. Red Blood Cells (or RBCs) have a 3-4 month life-span thus measuring the level of glycation of hemoglobin reflects an individual's average blood glucose control for the past 2 to 3 months. High percentage of A1c reflects poor control of blood glucose levels over the past few months.

N.B.: Conditions that change the half life of red blood cells such as many anemias (including that resulting from sickle cell disease) or thalassemias can confound the test.

Typically the Hb A1c molecule is glycated on the amino group at the N-terminus of the β-chain of hemoglobin. Amino groups at other locations such as Lysine residues may also occur. An example of the hemoglobin glycation is shown in Figure 2, wherein the glucose covalently binds to Lysine side chains and undergoes isomerization. 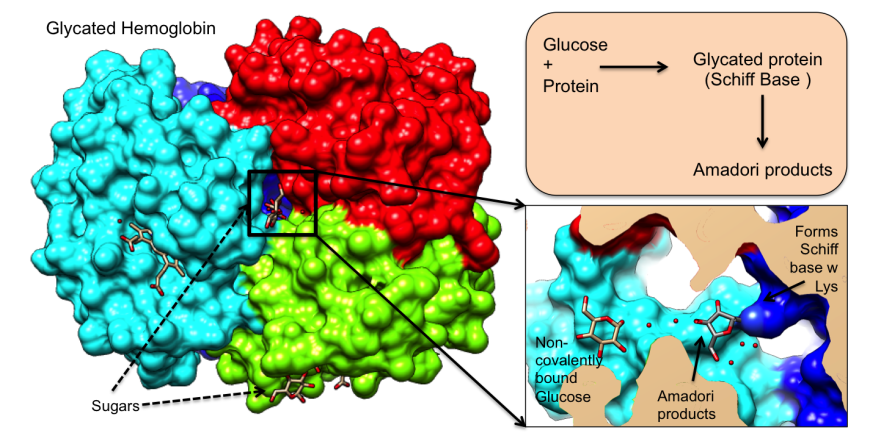 Figure 2: Glycated hemoglobin (PDB ID 3b75) and a close-up of the modified amino acid Lysine 99 in one of the hemoglobin α chains.