Molecule of the Month: Neurotransmitter Transporters 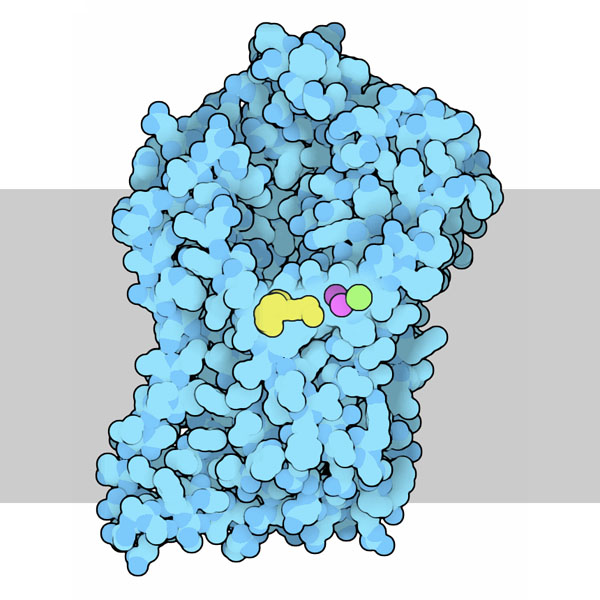 Dopamine transporter with an antidepressant drug (yellow), sodium ions (magenta) and a chloride ion (green).
Download high quality TIFF image
Nerve cells communicate with one another in two ways. Some neurons send an electrical signal directly to their neighbors, which is very fast. Most neurons, however, use chemical signals to transmit their messages, releasing small neurotransmitter molecules that are recognized by receptors on neighboring neurons. Neurotransmitters have two important advantages: since thousands of molecules are released, they amplify the signal, and since many different types of neurotransmitters are used, they can encode a variety of different types of signals. 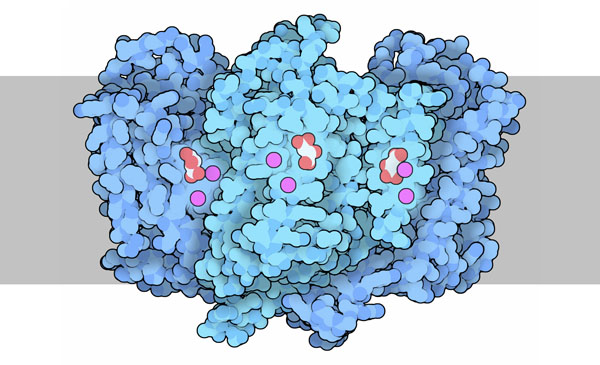 Neurotransmitter transporters have been difficult to study by x-ray crystallography, but structures have been obtained for several bacterial transporters with very similar function. These transporters import neurotransmitter-like nutrient molecules into the bacterial cell, powered by the co-transport of sodium ions. The one shown here, from PDB entry 2nwx , transports aspartate, and is an analogue of the glutamate transporter that is found in most of the excitatory synapses of your brain.

Another well-studied bacterial transporter, which is related to the dopamine transporter, has revealed several of the steps in the molecular pumping cycle. Three structures are shown here: one that is open to the outside of the cell, one with a molecule and several ions caught in the middle of being transported, and one that is open to the inside of the cell (PDB entries 3tt1 , 3f3e and 3tt3 ). Several alpha helices, shown here in bright turquoise, form a tunnel with a constriction at the center that performs the specific pumping task. To see an animation of this protein in action, click on the image for an interactive Jmol.

doi:10.2210/rcsb_pdb/mom_2014_3
About Molecule of the Month
The RCSB PDB Molecule of the Month by David S. Goodsell (The Scripps Research Institute and the RCSB PDB) presents short accounts on selected molecules from the Protein Data Bank. Each installment includes an introduction to the structure and function of the molecule, a discussion of the relevance of the molecule to human health and welfare, and suggestions for how visitors might view these structures and access further details.More