Molecule of the Month: Human Papillomavirus and Vaccines

The capsid protein of papillomavirus is used in vaccines that prevent cervical cancer. 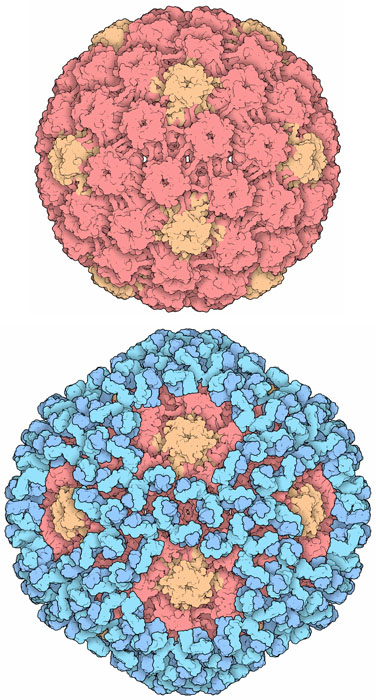 Structures of papillomavirus capsid from cryoelectron microscopy. Capsomeres in orange are surrounded by five other capsomeres, and the ones in red are surrounded by six neighbors. The structure at the bottom is covered with many virus-specific antibodies (blue, only the Fab portion of the antibody is included in the structure).
Download high quality TIFF image
Papillomaviruses are annoying pests that occasionally turn into deadly dangers. They attack cells in our skin and mucous membranes. When they infect cells, they ramp up the normal growth functions, often forming warts. Usually our defenses are able to get the infection under control, but in some exceptional cases, the virus persists and the unwanted growth can turn into cancer. Alarmingly, infection by a few particularly-virulent types of papillomavirus is the leading cause of cervical cancer. Fortunately, by studying these viruses, scientists have discovered highly effective ways to fight them.

Papillomavirus is a small virus, with a simple capsid surrounding a circular DNA genome. The capsid (PDB entry 3j6r) includes 360 copies of the major capsid chain, called L1. A second capsid chain, called L2, is found on the inside and may help with packaging the genome. The capsid structure, however, is not a typical quasisymmetrical virus. Instead, like simian virus 40, the L1 chains form 72 pentameric “capsomeres”, which then interact with one another through long flexible tails.

As soon as researchers discovered that these viruses cause cancer, they started looking for vaccines to fight them. Currently, the most effective approach is to create a “virus-like particle” that is composed of the L1 protein, but doesn’t include the DNA. The immune system builds defenses against these VLPs, but they are not infectious, so they are safe to use as a vaccine. PDB entry 6bt3 shows how antibodies coat the surface of the virus, making it unable to infect cells.

Many types of papillomaviruses infect humans, and researchers have perfected several prophylactic vaccines to fight the most dangerous ones. The bivalent vaccine targets the two major types involved in cervical cancer, types 16 and 18. The quadrivalent vaccine adds types 6 and 11, which cause most genital warts, and the nonavalent vaccine adds an additional 5 oncogenic strains, giving it an even wider spectrum of activity. The capsids shown here are type 16 papillomavirus, the most common cause of cervical cancer worldwide. 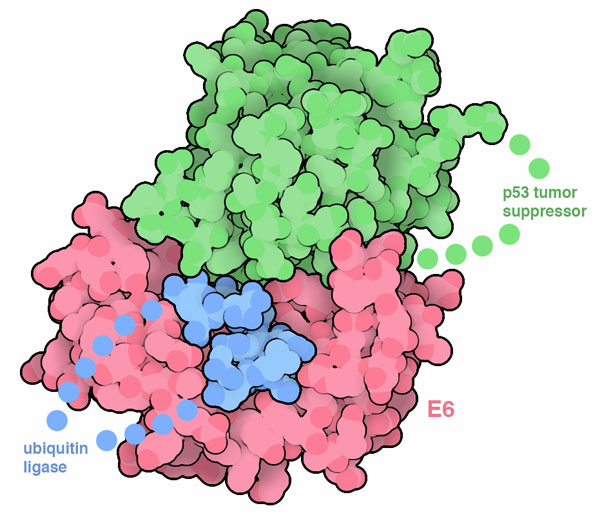 The papillomavirus genome encodes two small proteins, called E6 and E7, that act as cancer-causing oncogenes in particularly dangerous strains. Together they stimulate unnatural growth of cells and block their natural defenses. They act on many different cellular signaling proteins that control diverse processes such as proliferation and apoptosis. PDB entry 4xr8 captures E6 doing one of its terrible tasks. In the structure, it is forming a linkage between p53 tumor suppressor and ubiquitin ligase, which will ultimately lead to the destruction of p53 by proteasomes. In this way, the virus stops the cell from using apoptosis to terminate the infection. 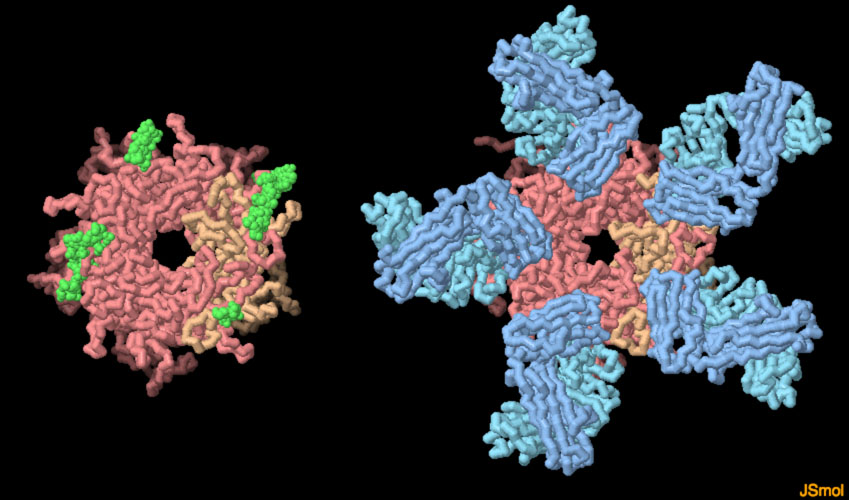 Papillomavirus binds to heparin molecules on the surface of the cells that it infects. Crystallographic structures of isolated L1 capsomeres have revealed that the heparin chains (on the left in green) are recognized by lysine-lined grooves on the surface of the virus (PDB entry 5w1o). Similar L1 capsomere structures with antibodies (on the right in blue) show that they can block this recognition, thus blocking attachment to the cell (PDB entry 5y9f). To compare these two structures, click on the image for an interactive JSmol.

doi:10.2210/rcsb_pdb/mom_2018_5
About Molecule of the Month
The RCSB PDB Molecule of the Month by David S. Goodsell (The Scripps Research Institute and the RCSB PDB) presents short accounts on selected molecules from the Protein Data Bank. Each installment includes an introduction to the structure and function of the molecule, a discussion of the relevance of the molecule to human health and welfare, and suggestions for how visitors might view these structures and access further details.More