Six proteins in measles virus work together to infect cells. 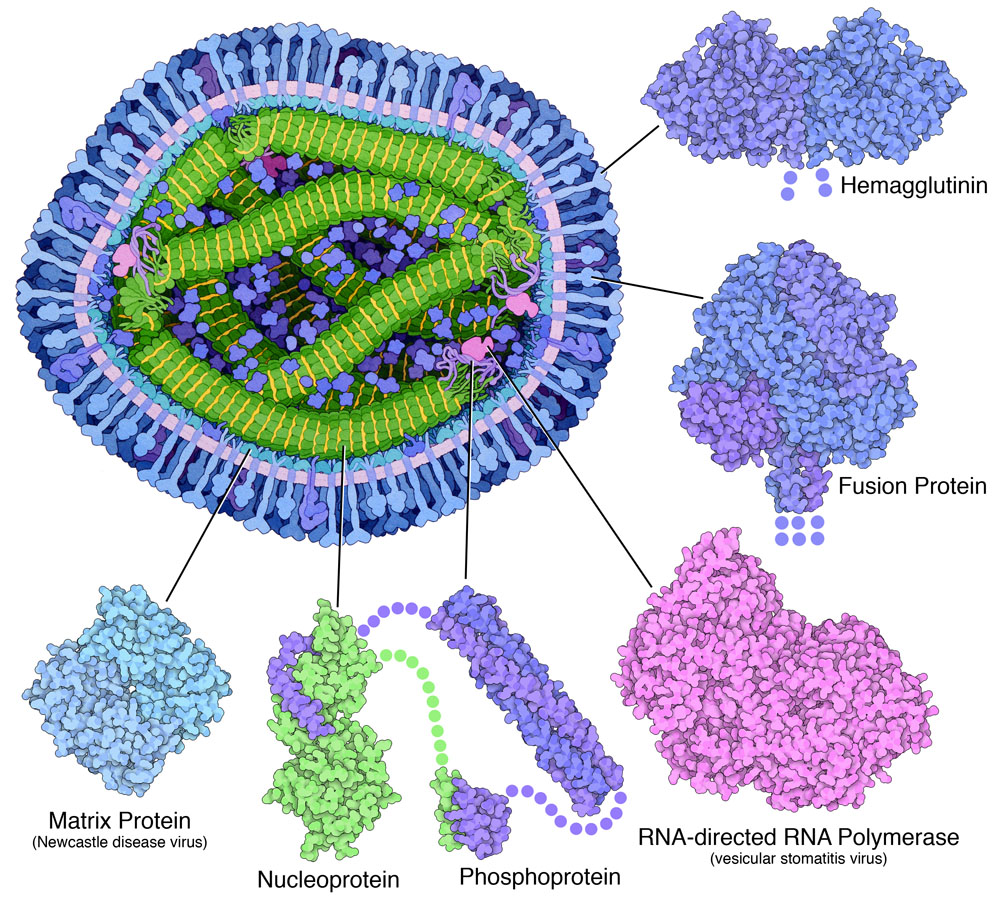 Illustration of a cross section through measles virus and structures for each of the viral proteins. Portions of the proteins that have not been determined are shown with dots.
Download high quality TIFF image
Measles is one of the most infectious viruses: 9 out of 10 people exposed to an infected person will contract the disease. Infection by the virus most often leads to an uncomfortable rash and then clears up, but some people have more serious or even deadly complications. Fortunately, there is an effective vaccine that protects against infection. The disease has not been eradicated, however, because the vaccine is not widely available in many parts of the world, and a growing number of people refuse vaccination.

The measles virus genome encodes six proteins, which are enough to choreograph its highly infectious life cycle. Three are involved in management of the genome. The genome is composed of RNA, so a special polymerase is made by the virus that makes new copies of RNA using RNA as a template (a related polymerase from a different virus is shown here, PDB entry 5a22). The RNA is encapsidated by the nucleoprotein, with six nucleotides bound to each protein subunit. The phosphoprotein has several flexible tails that tether the polymerase to the nucleoprotein, chaperoning the process of replication and transcription. Structures are available for the ordered regions of nucleoprotein and phosphoprotein (PDB entries 5e4v, 3zdo, 1t6o), but the remaining regions are thought to form a flexible, random tangle.

The virus is enveloped by a lipid membrane with two types of proteins that coordinate how the virus finds cells and enters them. The hemagglutinin protein (PDB entry 2zb5) binds to receptor proteins on the cell surface, and the fusion protein (PDB entry 5yxw) fuses the viral membrane to the cell membrane, releasing the viral genetic material into the cell. The hemagglutinin protein is the major target of our immune system, and the widely-used vaccines employ weakened forms of the virus that stimulate the immune system to make antibodies against the protein.

The matrix protein is involved in budding of new viruses from an infected cell, and ensuring that the viral RNA is included. As is often the case with biology, there are two conflicting models of how this occurs, based on the results of different experimental studies. The model shown here places matrix on the inner surface of the membrane, where it assists with bending the membrane and also interacts with the helical nucleocapsid. An alternative model proposes that tubes of matrix surround the nucleocapsid, which then associate with the membrane. The matrix protein structure shown here (PDB entry 4g1g) is from a related virus. 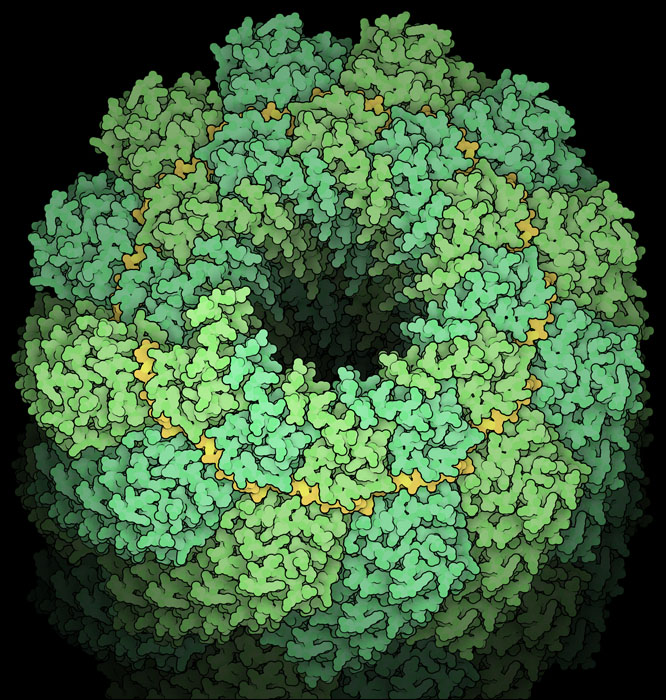 The measles nucleoprotein forms a large helical complex with RNA, as seen in PDB entry 4uft. It is thought to chaperone the process of replication and transcription by providing a ready site for binding of the polymerase/phosphoprotein complex while a new RNA chain is being built. The structure includes the stable core domain of the nucleoprotein and a strand of RNA, but the flexible tail of nucleoprotein was removed in this study. 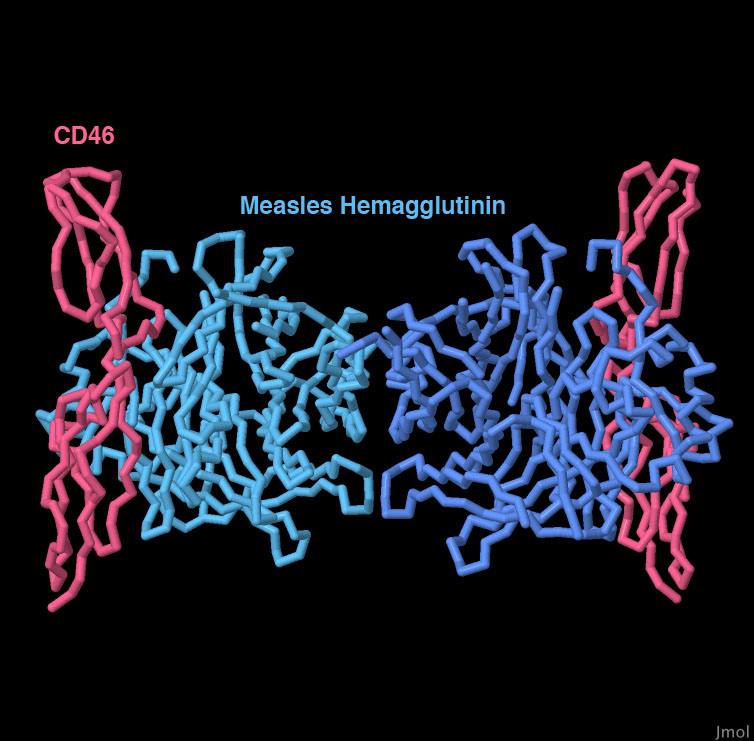 Measles hemagglutinin is known to bind to three different proteins found on the surface of our cells. Structures have been determined for each: CD46 (PDB entry 3inb, shown here in the image), SLAM (PDB entry 3alz) and nectin-4 (PDB entry 4gjt). In all three, two copies of the receptor protein (red) bind on opposite sides of a dimeric hemagglutinin molecule (blue). To explore all three structures in more detail, click on the image for an interactive JSmol.

doi:10.2210/rcsb_pdb/mom_2019_3
About Molecule of the Month
The RCSB PDB Molecule of the Month by David S. Goodsell (The Scripps Research Institute and the RCSB PDB) presents short accounts on selected molecules from the Protein Data Bank. Each installment includes an introduction to the structure and function of the molecule, a discussion of the relevance of the molecule to human health and welfare, and suggestions for how visitors might view these structures and access further details.More