Molecule of the Month: S-Nitrosylated Hemoglobin

Nitric oxide is attached to a conserved cysteine in hemoglobin and then released to control the flow of blood. 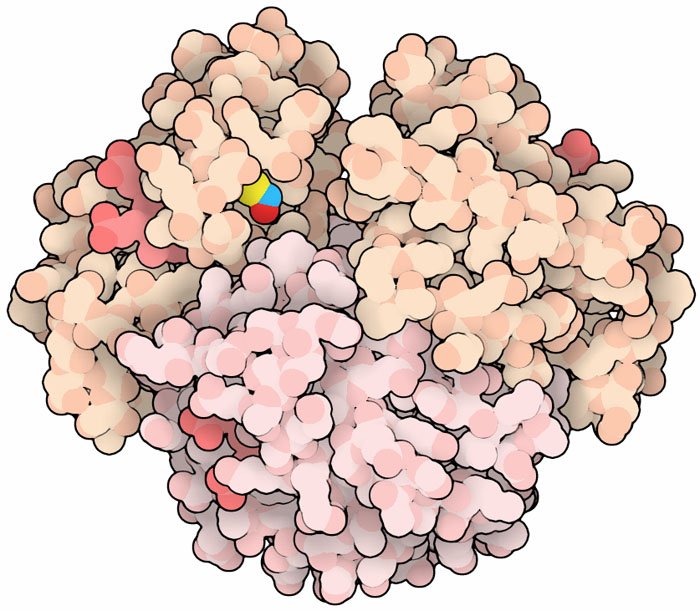 Nitric oxide, in bright blue and red, is attached to a specific cysteine in each of the beta chains of hemoglobin.
Download high quality TIFF image
Our circulatory system has been finely tuned through evolution to deliver oxygen quickly and efficiently. Hemoglobin is a perfect example: through its complex allosteric motions, it picks up large quantities of oxygen in the lungs and drops most of it off throughout the body. Tissues that need more oxygen can increase their share even more by dilating nearby blood vessels, so that more blood flows through and more oxygen is released. Surprisingly, hemoglobin, with some help from nitric oxide gas, is also a key player in this control of blood flow.

Nitric oxide, created by nitric oxide synthase, is a signaling molecule used to control, among other things, dilation of blood vessels. When activated, it also forms readily-reversible complexes with cysteine amino acids in proteins. These properties are combined to create a self-regulating system for blood flow. First, nitric oxide forms a complex with a specific cysteine on the beta chains of hemoglobin, binding preferentially to the oxygenated form. Then, as the blood flows through the tissues, hemoglobin releases its oxygen and changes shape to the deoxygenated form, causing release of the nitric oxide. Finally, it is transported out of the red blood cell and induces the surrounding blood vessels to dilate, increasing the flow of blood through the tissue.

In this way, hemoglobin acts as an oxygen sensor as well as an oxygen carrier, releasing nitric oxide in regions where oxygen is needed most. This function is so important that this cysteine (Cys93beta) is one of only three amino acids in hemoglobin conserved across all mammals and birds (along with two that position the heme). The reaction is also quite specific. Hemoglobin has several other cysteines, but as seen in PDB entry 1buw, nitric oxide attaches preferentially to this one cysteine in each of the two beta chains. 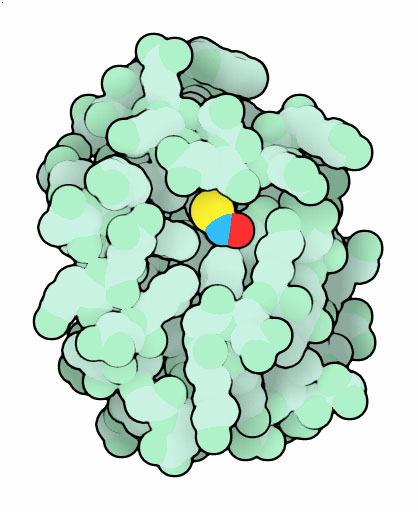 Many different proteins are regulated by addition of nitric oxide to key cysteine amino acids. This reaction occurs through several different mechanisms, including direct transfer between cysteines and with the help of specific enzymes. Thioredoxin is thought to play a central role as a convenient carrier in the transfer process. As seen in PDB entry 2ifq, nitric oxide reacts with a cysteine on one side, which then can act as a donor in reactions that transfer the nitric oxide to a target protein.

The structure of S-nitrosylated hemoglobin (PDB entry 1buw) was determined by starting with crystals of hemoglobin with carbon monoxide, and then exposing them to nitric oxide gas. Since the carbon-monoxide-bound form has a similar structure as oxygenated hemoglobin, only small changes occurred when nitric oxide attached: two amino acids at the end of the chain (numbers 145 and 146) became disordered. To explore the structures of S-nitrosylated and carbonmonoxy hemoglobin (PDB entry 1hco), click on the image for an interactive JSmol.

doi:10.2210/rcsb_pdb/mom_2019_5
About Molecule of the Month
The RCSB PDB Molecule of the Month by David S. Goodsell (The Scripps Research Institute and the RCSB PDB) presents short accounts on selected molecules from the Protein Data Bank. Each installment includes an introduction to the structure and function of the molecule, a discussion of the relevance of the molecule to human health and welfare, and suggestions for how visitors might view these structures and access further details.More