Molecule of the Month: MDM2 and Cancer

MDM2 controls the action of p53 tumor suppressor, making it a target for cancer chemotherapy. 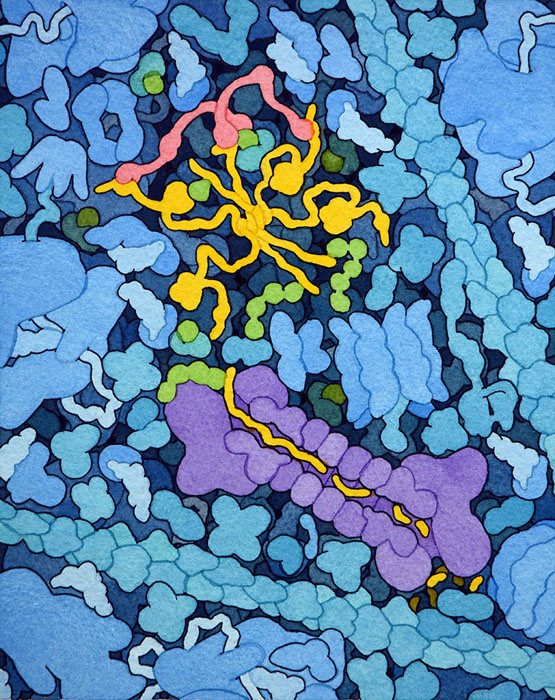 Artistic view of the interaction of MDM2 and MDMX (red) with p53 tumor suppressor (yellow). Ubiquitin (green) is added to p53, leading to its destruction by the proteasome (purple).
Download high quality TIFF image
P53 tumor suppressor is a guardian in our cells. It watches for damage, infection, and cancer, and if found, it can halt cell growth or trigger cellular self-destruction. P53 tumor suppressor must be closely regulated. This is the job of MDM2 (also known as HDM2 in human cells) and its partner MDMX: they watch over p53 so that these extreme consequences are only triggered when absolutely necessary.

Most of the time, MDM2 binds to p53. This has multiple effects. First, one domain of MDM2 binds to the transactivation domain of p53, blocking its signaling action. Another part of MDM2 holds a nuclear export signal, which is used to drag p53 out of the nucleus, away from the genes it activates, and into the cytoplasm. Finally, in the cytoplasm, another domain of MDM2 and MDMX act as a ubiquitin ligase, adding ubiquitin to p53 and targeting it for destruction by proteasomes.

Normally, enough MDM2 is made to keep p53 in check. But when damage or infection is sensed, MDM2 is inactivated and p53 is allowed to mobilize its resources to control the problem. Most cancer cells have developed ways to circumvent this process. In some cases, p53 itself is corrupted, so the cell has no way of protecting itself. In other cases, cancer cells find ways of creating more MDM2, often by having multiple copies of the gene that encodes it. This extra MDM2 continually blocks the action of p53, allowing the cancer cell to grow unchecked. 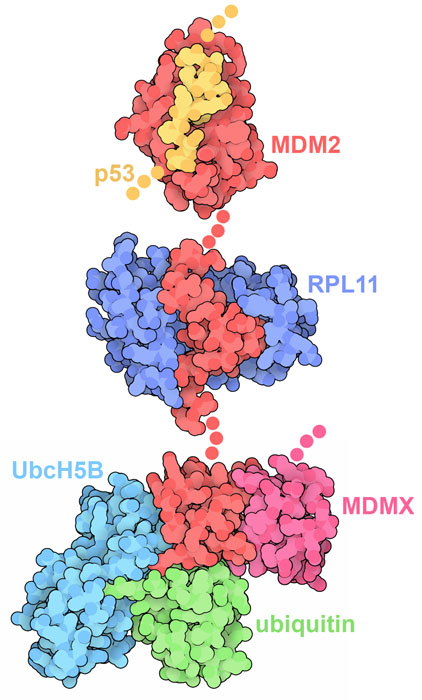 MDM2 has several connected domains, each with a specific function. Since the protein is so flexible, structural biologists have studied each of these domains separately. At one end, the N-terminal domain specifically binds to the transactivation domain of p53, blocking its action (PDB entry 1ycr). In the center, a Zn-finger domain binds to ribosomal proteins (PDB entry 4xxb). A C-terminal RING domain performs the reaction that connects ubiquitin to p53 (PDB entry 5mnj). 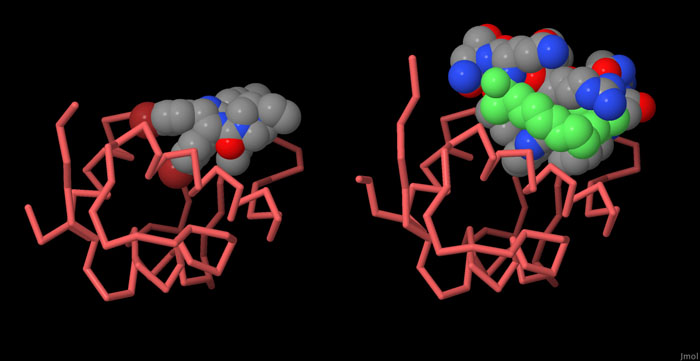 The interaction between MDM2 and p53 is an attractive target for cancer chemotherapy, because drugs that break this interaction would activate p53, killing the cancer cell. Several effective inhibitors have been discovered that bind at the site on MDM2 that recognizes p53. These include the small molecule Nutlin (PDB entry 1rv1) and SAH-p53-8, a small peptide taken from p53 and stapled in the proper conformation by a linker (PDB entry 3v3b, linker shown in green). To explore the complexes of these inhibitors with MDM2, click on the picture for an interactive JSmol.

doi:10.2210/rcsb_pdb/mom_2019_6
About Molecule of the Month
The RCSB PDB Molecule of the Month by David S. Goodsell (The Scripps Research Institute and the RCSB PDB) presents short accounts on selected molecules from the Protein Data Bank. Each installment includes an introduction to the structure and function of the molecule, a discussion of the relevance of the molecule to human health and welfare, and suggestions for how visitors might view these structures and access further details.More