Molecule of the Month: Ribonucleotide Reductase 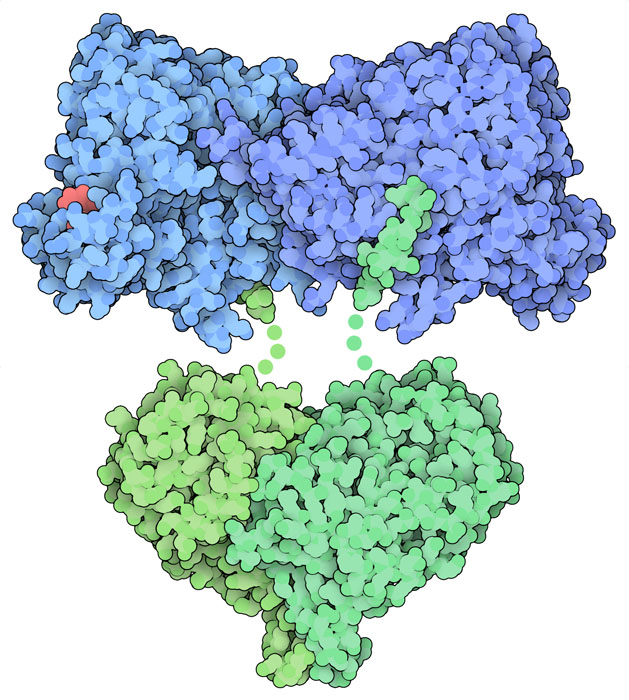 Escherichia coli ribonucleotide reductase forms a tetramer with two alpha subunits (blue) and two beta subunits (green). A nucleotide (red) is bound in a regulatory site in this structure.
Download high quality TIFF image
DNA and RNA are almost identical in structure, but one small difference has big consequences. A single oxygen atom, which is missing in each DNA nucleotide, distinguishes DNA from RNA. While small, this missing oxygen makes DNA more stable, making it a good molecule for long-term storage of information. On the other hand, RNA is less stable. The hydroxyl group formed by the extra RNA oxygen makes it more susceptible to hydrolysis, so RNA often acts as a biological “flash drive,” storing temporary biological data that is discarded when no longer needed. The only way of creating deoxyribonucleotides in our bodies is from ribonucleotides using the enzyme ribonucleotide reductase, which is essential for DNA synthesis and repair.

Ribonucleotide reductase is an important target for anticancer drugs. One way of stopping the growth of cancer cells is to shut down the enzymes involved in DNA synthesis. The obvious way of inhibiting this enzyme would be to create a molecule that looks like a nucleoside and blocks binding of normal nucleoside diphosphates in the active site. However, because nucleoside analogues are very similar to actual nucleosides used in the cell, they may be incorporated into DNA made by healthy cells as well as cancer cells, which results in bad side effects. One way of fixing this problem is making small molecules that are not nucleoside analogues, but still selectively block ribonucleotide reductase. Examples of both approaches are included below in “Exploring the Structure.” 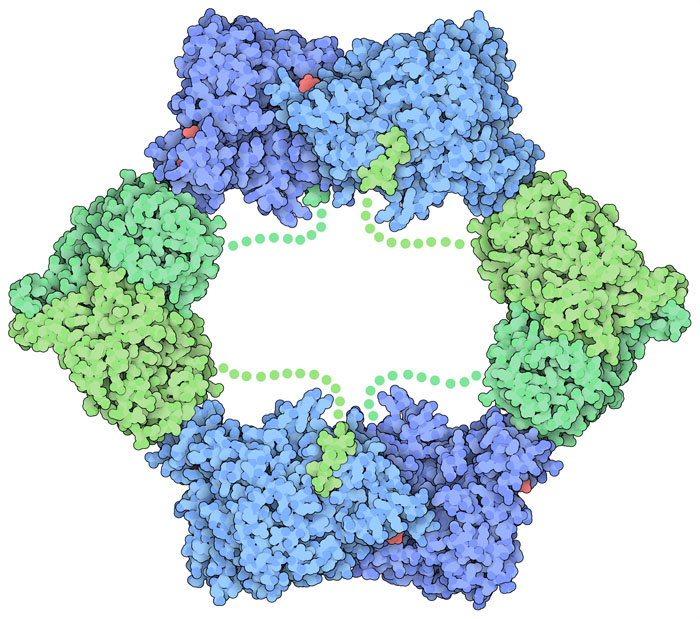 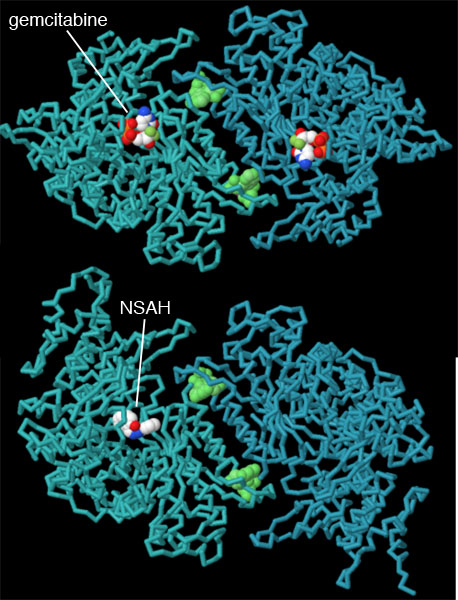 Structures of ribonucleotide reductase inhibited by two synthetic molecules are shown here (PDB entries 5tus and 2eud). Gemcitabine is a nucleoside-analogue anti-cancer prodrug that is currently used to treat various types of cancer. Gemcitabine inhibits the alpha subunit by binding to the catalytic site and “tricking” the enzyme by having fluoride atoms where a hydrogen atom and a hydroxyl group are supposed to be in the regular nucleoside. Naphthyl salicylic acyl hydrazone (NSAH) is a non-nucleoside inhibitor discovered by in silico screening. It also binds in the catalytic site and inhibits ribonucleotide reductase reversibly. To compare these structures in more detail, click on the image for an interactive JSmol.

doi:10.2210/rcsb_pdb/mom_2019_10
About Molecule of the Month
The RCSB PDB Molecule of the Month by David S. Goodsell (The Scripps Research Institute and the RCSB PDB) presents short accounts on selected molecules from the Protein Data Bank. Each installment includes an introduction to the structure and function of the molecule, a discussion of the relevance of the molecule to human health and welfare, and suggestions for how visitors might view these structures and access further details.More