Molecule of the Month: Cisplatin and DNA

Cisplatin treats cancer by causing damage to the DNA of cancer cells.

This article was written and illustrated by Helen Gao, Samuel G. Shrem and Saai Suryanarayanan as part of a week-long boot camp on "Science Communication in Biology and Medicine" for undergraduate and graduate students hosted by the Rutgers Institute for Quantitative Biomedicine in January 2021. 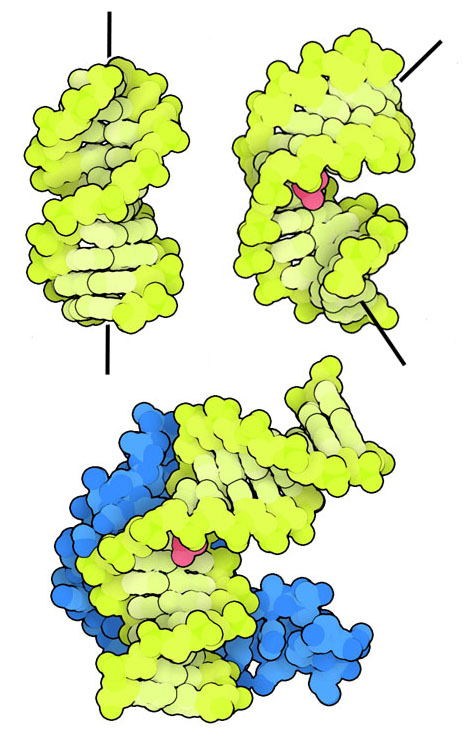 The DNA double helix (top left) bends when cisplatin binds (top right, with cisplatin in red) and attracts an HMG protein (bottom, with the protein in blue) to the site of bending.
Download high quality TIFF image

Imagine a drug that increases cure rates for a disease from 5% to 80%. Cisplatin, a tiny molecule with platinum bound to two amines and two chlorides, is exactly this type of game changer: in the mid-1970s, is was found to be highly effective in treating testicular cancers. Cisplatin crosslinks DNA by binding adjacent guanine bases on a strand. These crosslinks kink the DNA, hampering its normal function and damaging the cell and its genome. Besides testicular cancer, cisplatin is also one of the earliest FDA-approved drugs to treat ovarian cancers and tumors of connective tissue, and head and neck.

Cisplatin affects the cell by changing the conformation of the DNA, and thus, changing how it interacts with proteins. As seen here, the normal DNA (PDB ID 3dnb) is straight, but the cisplatin-bound DNA (PDB ID 3lpv) is bent at the site of the chemical modification. Proteins of the high mobility group DNA-binding family (HMG-domain proteins) prefer to bind to bent DNA, and thus bind to bent cisplatin-bound DNA, as seen in PDB ID 1ckt. The HMG protein then shields the cisplatin-damaged DNA from other proteins involved in DNA replication, repair, and transcription. These events collectively trigger apoptosis or programmed cell death.

Cisplatin is very effective in treating several types of human cancer. However, tumors can develop resistance to cisplatin treatment by several ways, including changing the traffic of cisplatin across the cell membrane and down-regulating mechanisms that cause cell death. Structural studies have been pivotal in discovering drugs that overcome resistance and have even greater potency and reduced toxicity. For example, a chemical cousin to cisplatin, oxaliplatin, has proven to be effective in treating some tumors with acquired cisplatin resistance. 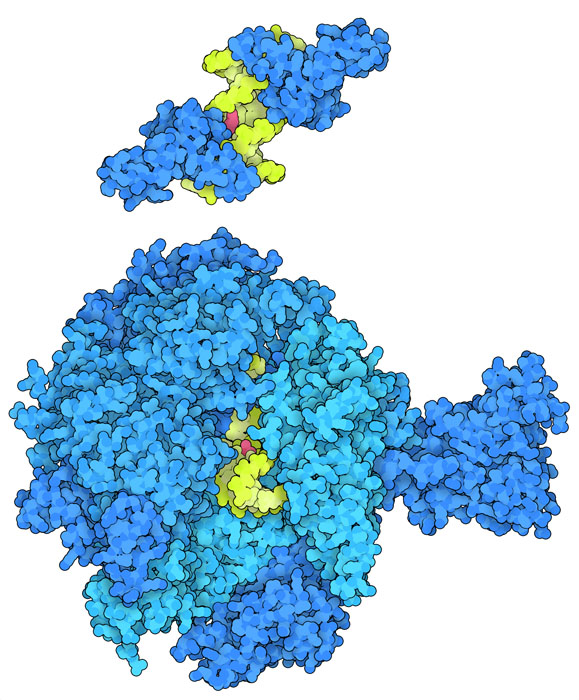 Cisplatin-bound DNA impairs the normal functions of proteins involved in DNA repair and transcription. The nucleotide excision repair (NER) process typically removes bulky abnormalities caused by chemicals or radiation (often called lesions) by cutting out the damaged region of DNA. For example, NER protein XPA binds to the bent DNA from both sides of the damaged helix, as seen in PDB entry 5a39. Then, XPA inserts a loop into each strand of the DNA, separating the DNA into single strands in those regions. This allows other NER proteins to bind and remove the entire lesion. However, these defenses may be blocked when HMG proteins bind to the cisplatin-DNA complex, allowing the damage to persist. The cisplatin-bound DNA may also prevent RNA polymerase II (PDB ID 2r7z) from transcribing the cell’s DNA to RNA. When cisplatin is bound to DNA, the bulky lesion gets stuck in the enzyme and cannot move to the active site where transcription occurs. 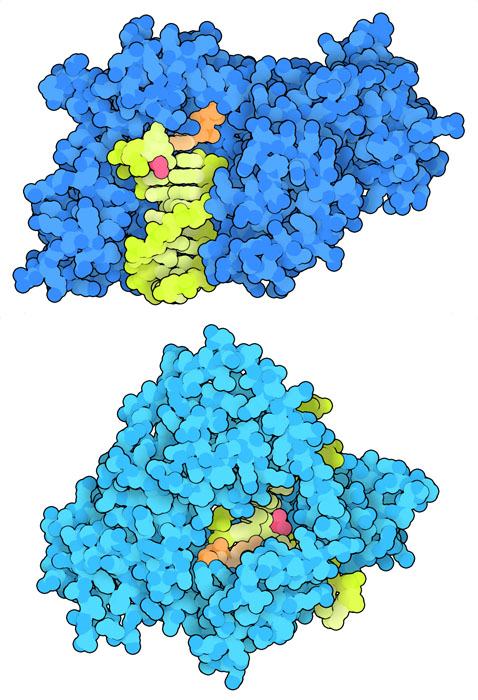 Eukaryotes use specialized DNA polymerases to bypass lesions like cisplatin and other damage, such as crosslinks formed by UV radiation. However, cancer cells can hijack these mechanisms to gain resistance to cisplatin. One example is DNA polymerase eta (PDB ID 2r8k), a repair polymerase that normally helps cells to survive exposure to UV radiation. Cancer cells may use this enzyme to replicate their DNA across the cross-linked lesion. DNA polymerase kappa may also help bypass the cisplatin-DNA lesion (PDB ID 6bs1). 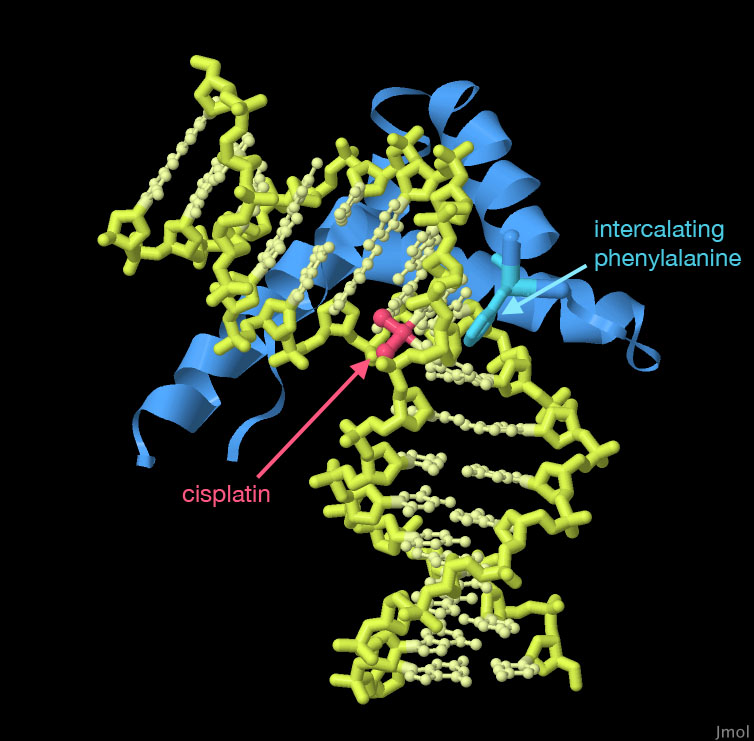 Cisplatin bends DNA by forming covalent bonds between its central platinum and two adjacent guanine bases. PDB entry 1ckt includes a short DNA duplex, a cisplatin lesion and the DNA-binding domain of an HMG protein. HMG proteins also bend the DNA when they bind. Notice how the HMG protein intercalates a phenylalanine (cyan) into the DNA helix at the site of the cisplatin-induced bend. To explore this structure in more detail, click on the image for an interactive JSmol.

doi:10.2210/rcsb_pdb/mom_2021_3
About Molecule of the Month
The RCSB PDB Molecule of the Month by David S. Goodsell (The Scripps Research Institute and the RCSB PDB) presents short accounts on selected molecules from the Protein Data Bank. Each installment includes an introduction to the structure and function of the molecule, a discussion of the relevance of the molecule to human health and welfare, and suggestions for how visitors might view these structures and access further details.More