Molecule of the Month: Acetohydroxyacid Synthase

In plants, AHAS performs the first step in synthesis of three essential amino acids, making it an effective target for herbicides. 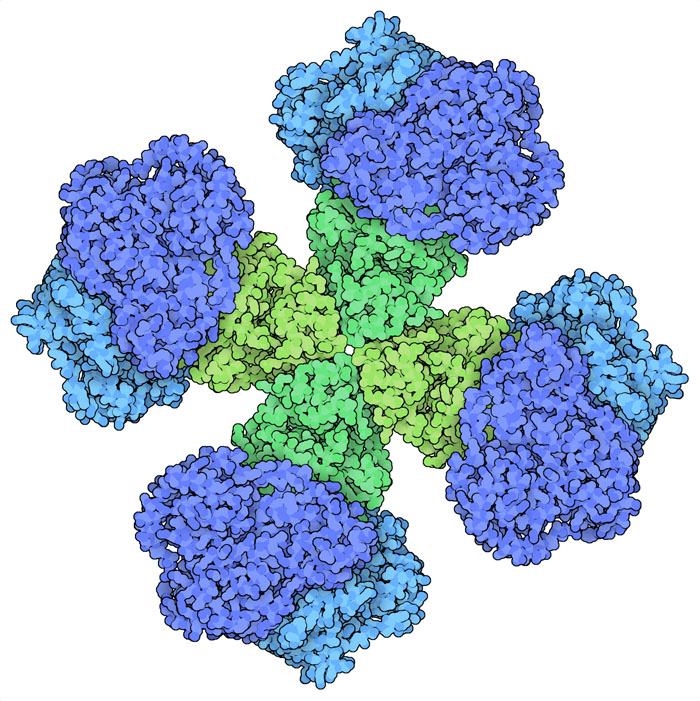 Acetohydroxyacid synthase (AHAS) from a plant, with catalytic subunits in blue and regulatory subunits in green.
Download high quality TIFF image
Over the course of the evolution of life, biochemical and biological functions are gained and lost. This happens at the level of the whole organism: for example, natural selection has resulted in butterflies that look exactly like leaves, gaining perfect camouflage against predators, whereas cave-dwelling animals have gradually lost their coloration, and the ability to see it, over the course of evolution and natural selection in their dark environment. Similarly, evolution happens at the level of molecules. Plants have the molecular machinery needed to build all of their amino acids from scratch, using simple nutrients from the environment. Animals, however, have lost this ability over the course of evolution. Since we get a steady supply of amino acids in the plants (and animals) that we eat, our cells don’t need to be able to create them all. Instead, our cells can invest the energy needed to make these amino acids towards other functions required for survival. Somewhere in the distant past, our cells lost the ability to make nine types of amino acids, and today, these are classified as “essential” amino acids that are required in our diet.

Leucine, valine, and isoleucine are three of the amino acids that are “essential” in our diet. They all have a sidechain solely composed of carbon and hydrogen atoms with a short branch, and are collectively called “branched-chain amino acids.” Plants, bacteria and fungi can make these amino acids using pyruvate created by glycolysis. The enzyme acetohydroxyacid synthase (AHAS, shown here from PDB ID 6vz8) performs the first step in the synthesis. To make valine, it takes two molecules of pyruvate, pulls carbon dioxide off of one, and connects the remaining part to the second pyruvate to create an amino-acid-sized precursor. Then, three other enzymes shuffle atoms around and add the “amino” group to form the amino acid. Similarly, a few additional enzymes are needed to make leucine, and isoleucine synthesis begins by using a slightly larger molecule in place of the second pyruvate in the AHAS reaction.

We often think of these biosynthetic enzymes as being conceptually arranged into “pathways” where molecules are modified step-by-step as they encounter one enzyme after the next. Often, there are key enzymes in these pathways that perform a “committed” step. For example, AHAS performs the first step for synthesis of valine and leucine, and once the two pyruvate molecules are linked together, they are committed to the production of these amino acids. Committed steps are often the place where the processes of biosynthesis are regulated, as described in the following section. Also, they are vulnerable places for blocking synthetic pathways with inhibitors. AHAS is the target of dozens of widely-used commercial herbicides. It is an attractive target because these herbicides are highly effective, since they block an essential function, and they are safe for use, since AHAS is not found in our cells. 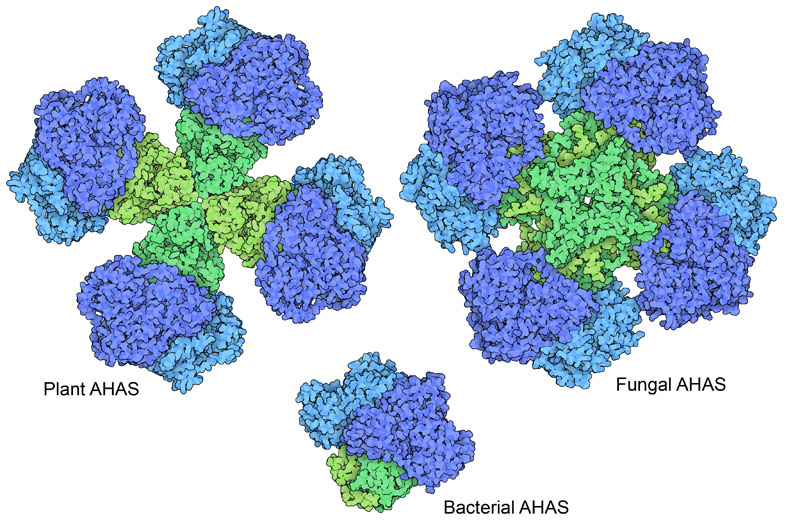 Acetohydroxyacid synthases from a plant, yeast, and a bacterium, with catalytic subunits in blue and regulatory subunits in green.
Download high quality TIFF image 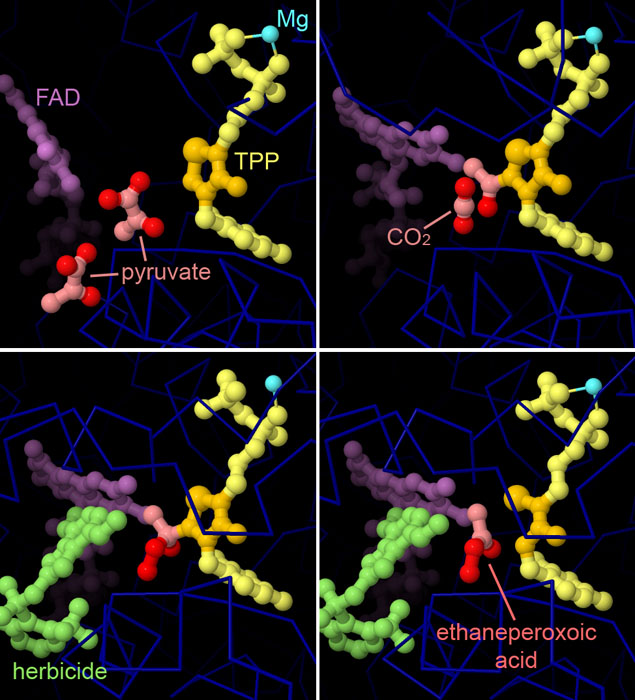 Several crystallographic structures of yeast AHAS reveal steps of the catalytic reaction, and how herbicides block it. The active site uses several cofactors to assist with the reaction. A thiamine cofactor (TPP, shown in yellow with the reactive ring in orange) performs the central reaction that removes carbon dioxide. A magnesium ion (Mg, turquoise) positions the cofactor. AHAS also binds to FAD (magenta), which must be in the reduced state in the active enzyme, and several oxygen molecules of unknown function (not shown here). PDB ID 6bd9 includes two pyruvate molecules (red and pink) entering the active site and PDB ID 6bd3 captures the enzyme after one of these has attached to the thiamine cofactor and carbon dioxide has been removed. PDB ID 5wkc has a herbicide molecule (penoxsulam, in green) that blocks the entryway into the active site. It also leads to additional problems: in this structure, the attached substrate molecule has been converted into a reactive oxygenated molecule. In another subunit in this PDB entry, the reactive molecule (ethaneperoxoic acid) has been released, leaving a damaged thiamine cofactor with a broken ring. Ethaneperoxoic acid can also oxidize the FAD, further inhibiting the action of the enzyme. To explore these structures in more detail, click on the image for an interactive JSmol.

doi:10.2210/rcsb_pdb/mom_2021_11
About Molecule of the Month
The RCSB PDB Molecule of the Month by David S. Goodsell (The Scripps Research Institute and the RCSB PDB) presents short accounts on selected molecules from the Protein Data Bank. Each installment includes an introduction to the structure and function of the molecule, a discussion of the relevance of the molecule to human health and welfare, and suggestions for how visitors might view these structures and access further details.More