Learn about the Molecular Mechanisms of Cancer

In order to understand the information below, you should be familiar with the biomolecular concepts listed below:

Below you will find the overview of the challenge topics with links to related resources and examples of relevant PDB structures to be visualized in the video entry.

Notice: This topic overview specifically highlights the proteins and their functions that are relevant to the p53/p21 pathway. Most of the proteins described here are essential components in other pathways.

The cell division cycle is a series of sequential events that lead to a cell splitting into 2 daughter cells. This process follows distinct phases: G1, S, G2, and M. In the G1 phase, the cell is increasing its supply of proteins relevant for DNA replication and copying its organelles. In the S phase, the cell replicates its DNA. In the G2 phase, the cell continues to grow, preparing itself for mitosis by reorganizing its microtubules to complete the division in the M phase (see Figure 1, outer ring). 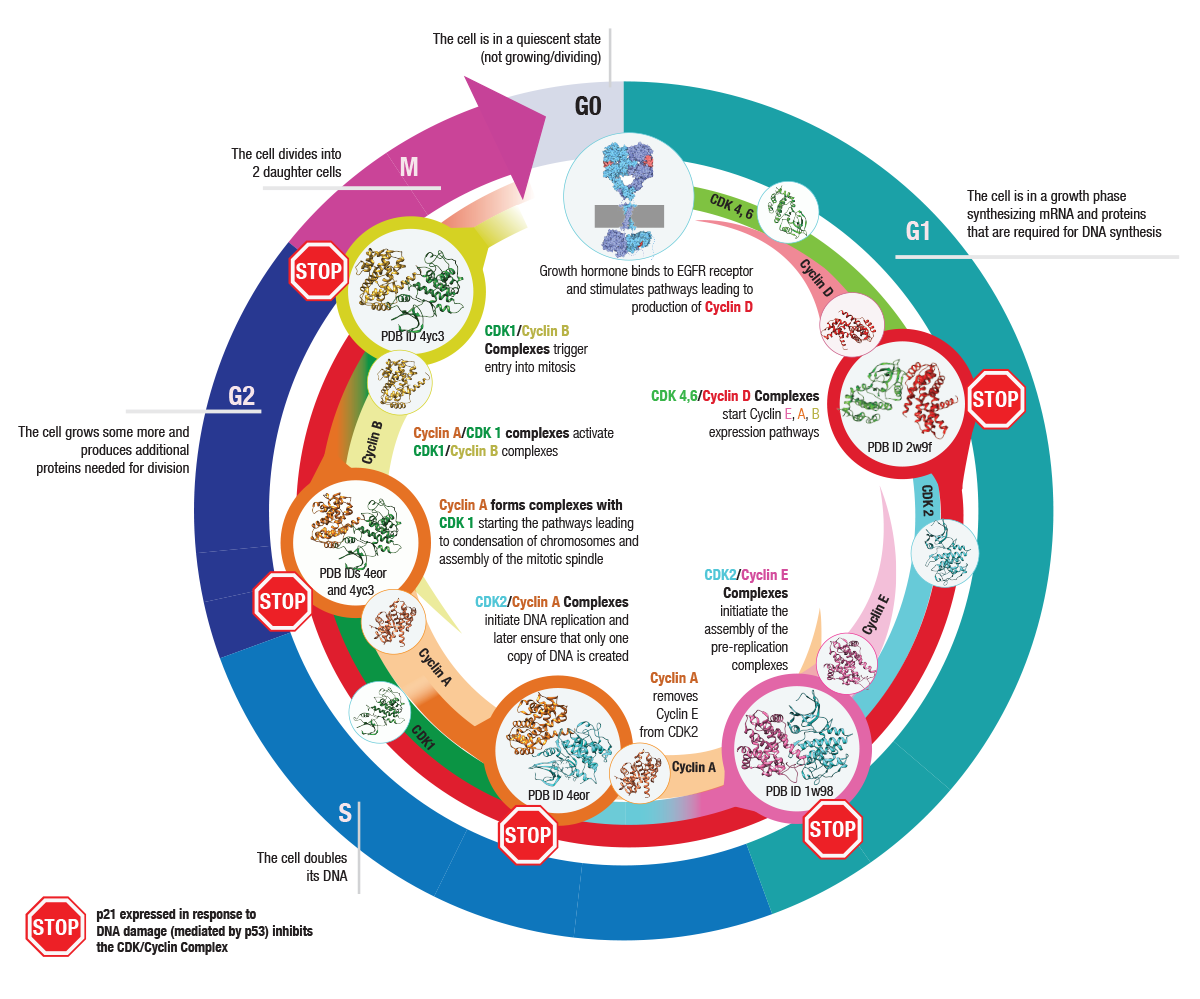 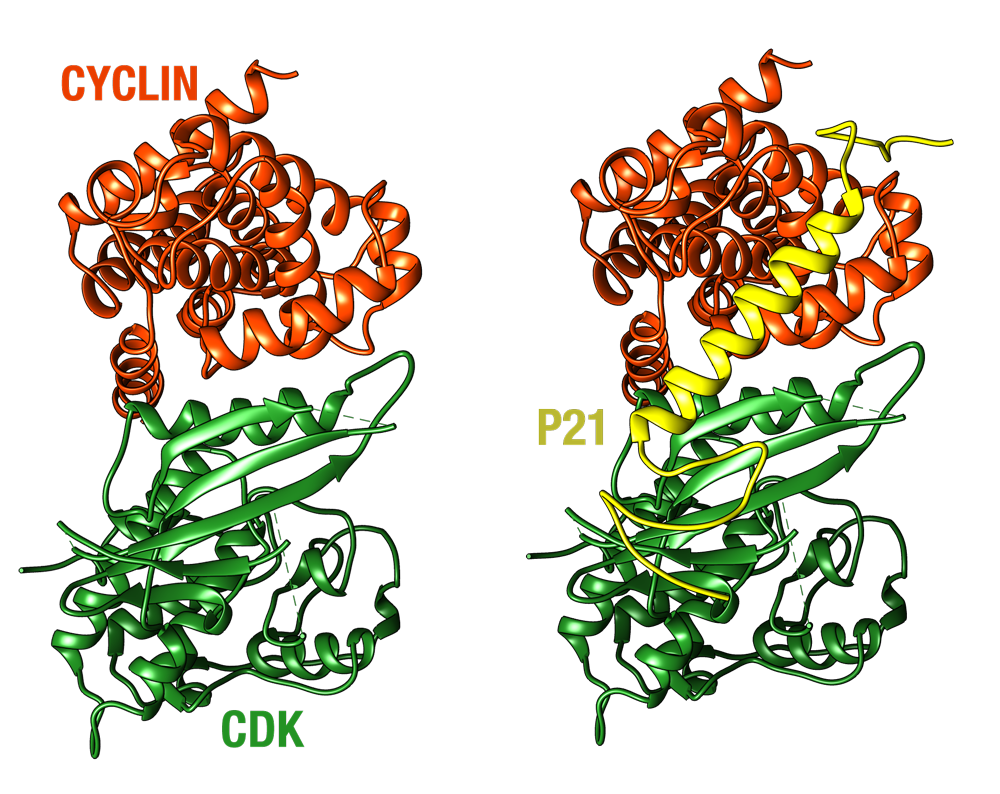 The cell cycle progression is mediated through various cyclins and cyclin-dependent kinases (CDKs). Kinases are a large family of proteins that can phosphorylate other proteins. Phosphorylation is a process of adding phosphoryl groups to certain amino acids (see Figure 4A). This process can activate or deactivate the protein. CDKs have to create a complex with another protein – cyclin – to be able to phosphorylate other proteins. The levels of various phase-specific CDKs are relatively stable throughout the cell cycle while the concentrations of phase-specific cyclins rise and fall. Figure 1 shows the phase-specific cyclins and CDKs and their key functions in the progression of the cell cycle.

The protein p53 is activated when DNA damage is detected. p53 triggers expression of the p21 protein. p21 inhibits CDK/cyclin complexes (see Figure 2) pausing the cell cycle progression and giving the cell time to repair its DNA or start pathways leading to its death.

Molecule of the Month articles:

p53 is a transcription factor that responds to cell stress events that can result in DNA damage. p53 initiates and stimulates the production of proteins that assist in DNA repair, arrest the cell-division cycle, or initiate apoptosis. p53 is composed of four identical chains. At the center of p53 is a tetramerization domain that ties the four chains together. Each of the chains features a DNA-binding domain and a transactivation domain (see Figure 3 A).

When there are no signals about DNA damage, MDM2 is bound to the transactivation domain of p53, preventing the protein from becoming activated (see Figure 3B).

Positive stimulation of p53 resulting in production of p21

Cellular stresses such as UV light, ionizing radiation, and other factors can cause breaks in DNA strands. The DNA damage activates complex molecular pathways. One of the proteins activated through such pathways is the CHK2 kinase. The protein can phosphorylate the p53 transactivation domain at the Serine 20 site (see Figure 4A). This activates p53 causing it to bind to DNA. p53 typically binds to special sequences in the target genes called p53 response elements.

Figure 4. A) DNA damage activates complex molecular pathways. One component of them is CHK2 kinase (green, PDB structure 2cn5). The kinase phosphorylates p53 at the Serine 20 site. B) Phosphorylation activates p53 causing it to bind to a special segment of DNA called the p53 response element (PDB structure 3ts8).

One of the target genes for p53 is the CDKN1A gene encoding the p21 protein. After binding to the DNA, p53 engages the RNA Polymerase II (see Figure 5). The polymerase then transcribes the p21 gene into mRNA, starting the process leading to production of the p21 inhibitor. p21 then inhibits the CDK/cyclin complexes (see Figure 2) thus halting the progression of the cell cycle in the face of DNA damage present. 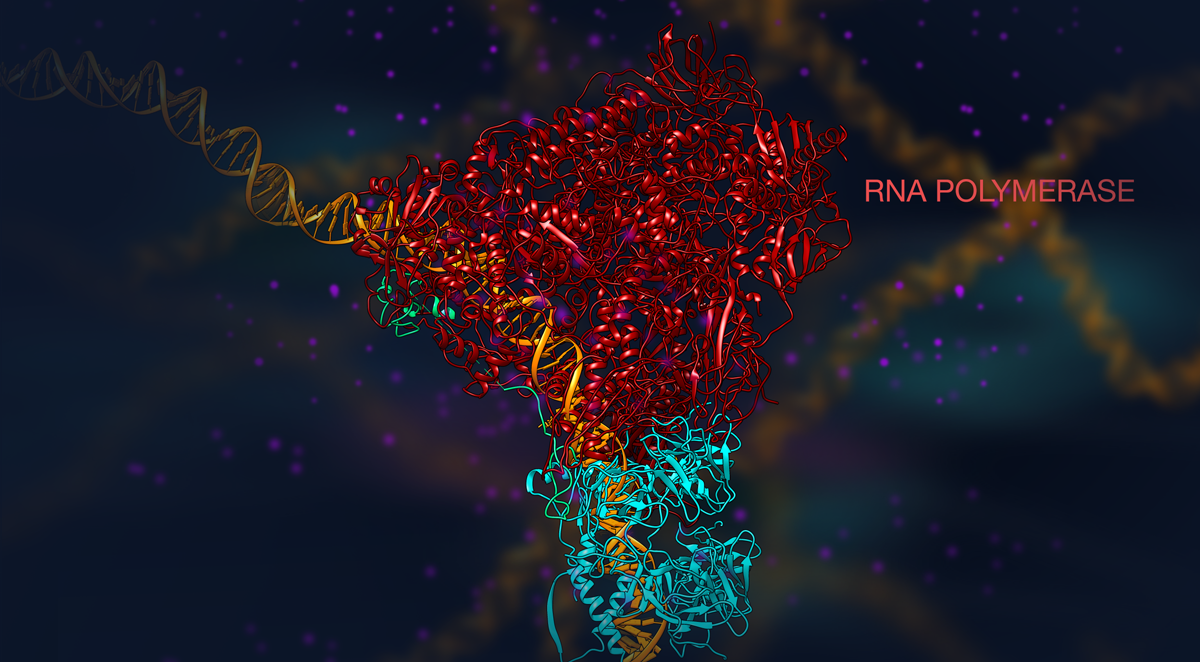 If a mutation is present at the DNA binding site, p53 can’t bind to DNA and initiate the p21 production. As a result, the cell will divide with errors in the DNA code.

Molecule of the Month articles:

Growth factors are required to initiate the G1 phase of the cell cycle. One such ligand is epidermal growth factor (EGF). The small peptide can bind to the extracellular portion of the EGF receptor (EGFR). Inactive EGFRs exist as monomers in cellular membranes. The receptor consists of an extracellular module, a membrane helix, and an intracellular kinase domain that features a long C-terminal tail studded with tyrosine residues (see Figure 6A). EGF binding induces the dimerization of the EGFRs. This process activates the kinase domains. The kinases now can bind ATP and tyrosine residues from the C-terminal tails and phosphorylate the tyrosine residues (see Figure 6B).

Molecule of the Month article:

Figure 6. A) The inactive EGFR receptors are monomers (shown in cyan and blue). The receptor comprises an extracellular module (PDB structure 1nql) , a membrane helix (shown from PDB structure 5lv6), and an intracellular kinase domain (3gt8). The kinase features a long C-terminal tail with multiple tyrosine residues (shown on the model in flat render and lighter green). In the monomer form, the kinase is inactive. B) Upon EGF binding, the receptors dimerize. The model shown consists of PDB structures 3njp-extracellular modules, 5lv6-membrane helices, and 2gs6-activated kinases. The kinases bind ATP (highlighted in magenta) along with tyrosine residues from the tail and phosphorylate them. Added phosphoryl groups are shown in orange and red.

Activation and inactivation of ras protein

Ras is a small, globular protein that can be switched on or off by binding GTP and GDP respectively.

The activation of ras is dependent on the phosphorylation of the C-terminal tails of the kinase domain in EGFR. The adaptor protein GRB2 (Figure 7A) binds to the tail and recruits SOS (Figure 7B). SOS binds the inactive ras protein with GDP in its active site (Figure 7C). Upon binding, SOS opens the binding site of ras, allowing the exchange of GDP for GTP (Figure 7D). This exchange activates ras, allowing it to activate the raf kinase and to progress the pathway that ultimately leads to expression of various proteins essential in the cell division cycle, including cyclin D (Figure 7E).

Ras can break down the GTP on its own, however the process is slow. It is accelerated by ras-specific GTPase-activating proteins (rasGAP, Figure 7E). These enzymes hydrolyze the GTP to GDP. For details on the hydrolyzation reaction, see the Exploring the Structure section of the Molecule of the Month article on Ras Protein.

Mutation in the ras protein disallow the completion of the hydrolyzation reaction causing ras to stay in the ‘on’ state and constantly promote gene expression and cell growth.