Molecule of the Month: Ribonuclease A 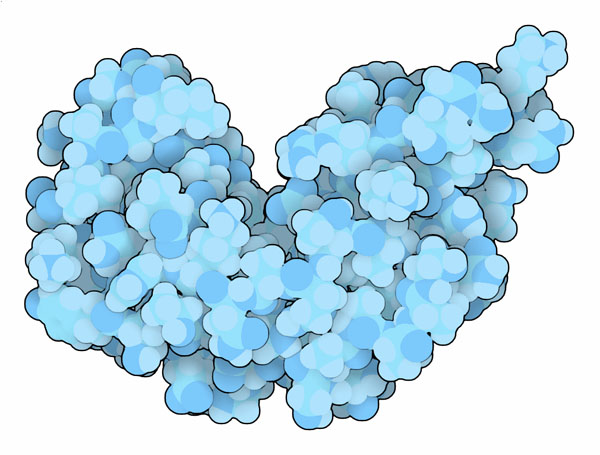 Ribonuclease A.
Download high quality TIFF image
Ribonuclease A is the enzyme that digests RNA in our food. Because is it small, stable, and easily purified, ribonuclease has been an important enzyme in biochemical research. It was used by Christian Anfinsen to prove that the sequence of amino acids determines the structure of a folded protein and it was used by Stanford Moore and William Stein to show that a specific arrangement of amino acids is used in the catalytic center of enzymes. Ribonuclease A was also the first enzyme synthesized by R. Bruce Merrifield, showing that biological molecules are simply chemical entities that may be constructed artificially. All of these central concepts, discovered with the help of ribonuclease, were awarded Nobel Prizes.

Ribonuclease A, shown here from PDB entry 5rsa , is an endonuclease, which means that it can cut RNA in the middle of a strand. Other ribonucleases degrade RNA from the ends, such as the exosome that is involved in degradation of RNA inside cells. In ribonuclease A, the RNA chain fits in a groove and is attacked by a collection of acidic and basic amino acids. It is a voracious molecular shredder, cleaving after cytidine bases best, and after uridine bases about half as fast. It has been honed by evolution and is one of a select group of diffusion-limited enzymes that act as fast as substrates can get to them.

Steady as a Rock

Ribonuclease A is amazingly stable. For instance, in one procedure for purifying ribonuclease A from cow pancreas, extracts are treated with sulfuric acid and then heated almost to boiling, and ribonuclease A is the only thing that survives. This is not surprising, since it is secreted by the pancreas and needs to perform its job in the inhospitable environment of the digestive tract. The stability of ribonuclease A is due in large part to four disulfide linkages that glue different parts of the chain together. 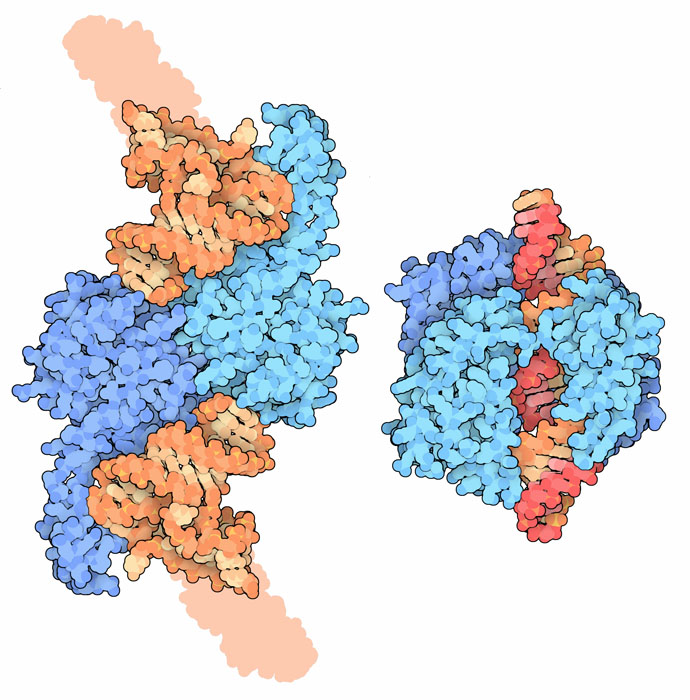 Ribonuclease A is a powerful tool for chopping RNA into bits, but cells also need other tools to make precise modifications to their RNA. For instance, transfer RNA molecules are made in longer lengths and then must be trimmed to the proper size. The enzyme ribonuclease Z, shown on the left from PDB entry 2fk6 , trims the end that accepts the amino acid. This structure includes the dimeric enzyme (in blue) and partial structures for two transfer RNA molecules (in orange). Ribonuclease P, which is composed of both protein components and a ribozyme, trims the other end (not shown). Ribonuclease III, shown on the right from PDB entry 2ez6 , wraps around sequences of RNA that form perfect double helices, making a few specific cuts that are needed for maturation and regulation of ribosomal and messenger RNA.

Ribonuclease is a dangerous molecular machine that indiscriminately chops up any RNA that it finds. It is toxic to cells, and was once tested as a possible therapy for killing cancer cells. Unfortunately, it is also toxic to normal cells, so it isn't much use as a treatment. Cells protect themselves from ribonuclease with powerful inhibitors such as the ribonuclease inhibitor shown here in green from PDB entry 1dfj . These inhibitors are found inside cells and they quickly bind to any ribonuclease that finds its way inside. The binding is amazingly tight due to the extensive contacts formed as the inhibitor wraps around the ribonuclease.

This illustration was created with Jmol--you can see an interactive version of the structure by clicking on the image.

doi:10.2210/rcsb_pdb/mom_2008_9
About Molecule of the Month
The RCSB PDB Molecule of the Month by David S. Goodsell (The Scripps Research Institute and the RCSB PDB) presents short accounts on selected molecules from the Protein Data Bank. Each installment includes an introduction to the structure and function of the molecule, a discussion of the relevance of the molecule to human health and welfare, and suggestions for how visitors might view these structures and access further details.More