Molecule of the Month: Pepsin

During the holiday season, we often place greater demands on our digestive enzymes than at other times of the year. Our digestive system contains a host of tough, stable enzymes designed to seek out those rich holiday treats and break them into small pieces. Pepsin is the first in a series of enzymes that digest proteins. In the stomach, protein chains bind in the deep active site groove of pepsin, seen in the upper illustration (from PDB entry 5pep ), and are broken into smaller pieces. Then, a variety of proteases and peptidases in the intestine finish the job. The small fragments--amino acids and dipeptides--are then absorbed by cells for use as metabolic fuel or construction of new proteins.

Enzymes that digest proteins pose a real challenge. The enzyme must be constructed inside the cell, but controlled in some manner so that it doesn't immediately start digesting the cell's own proteins. To solve this problem, pepsin and many other protein-cutting enzymes are created as inactive "proenzymes," which may then be activated once safely outside the cell. Pepsin is constructed with an extra 44 amino acids, shown in green in the lower illustration (from entry 3psg ), which block the large active site groove and hobble the enzyme. In the stomach, this extraneous chain is clipped off and the enzyme begins its destructive campaign.

A Piece of Scientific History

For several reasons, digestive enzymes are attractive candidates for scientific study. They are easily isolated and present in large amounts in digestive juices. They are also extraordinarily stable, because they perform their jobs under the harsh conditions present in the digestive system. The reactions catalyzed by digestive enzymes are also easily followed: you can add them to a protein such as gelatin and watch it lose its gel-like consistency. In the 18th century, pepsin was the first enzyme to be discovered, and later, pepsin was the second enzyme to be crystallized (after urease). These crystals played an important role in showing that enzymes were proteins and that they had a defined structure. Today, the structure of pepsin, determined from similar crystals, is available in PDB entry 5pep and several others.

Pepsin is one example of a group of enzymes termed "acid proteases." In the case of pepsin, this name is doubly appropriate. Pepsin works its best in strong hydrochloric acid. But the similarity with the other enzymes pictured here refers to a second type of acid. The active site of the acid proteases rely on two acidic aspartate amino acids, which activate a water molecule and use it to cleave protein chains. These aspartates are pictured on the next page.

The acid proteases have evolved to fill several functional roles in different organisms. Pepsin, shown at upper left (PDB entry 5pep ), is optimized for digestion of food in the acidic environment of the stomach. It is very promiscuous, cleaving proteins in many different places. Chymosin, shown at upper right (PDB entry 4cms ), is made by young calves to break down milk proteins. A purified form of chymosin, taken from calf stomach, has been used for centuries to curdle milk in the production of cheese. Cathepsin D, shown at lower left (PDB entry 1lyb ), digests proteins inside lysozomes, the tiny stomachs inside cells. Other cellular acid proteases, such as renin (not shown, PDB entry 1hrn ), are designed to make very specific cuts in one particular protein, aiding in the maturation of a hormone or structural protein. Endothiapepsin, shown at lower right (PDB entry 4ape ), is made by a fungus and excreted into the surrounding environment, breaking up the surrounding proteins and allowing the fungus to feed on the pieces. 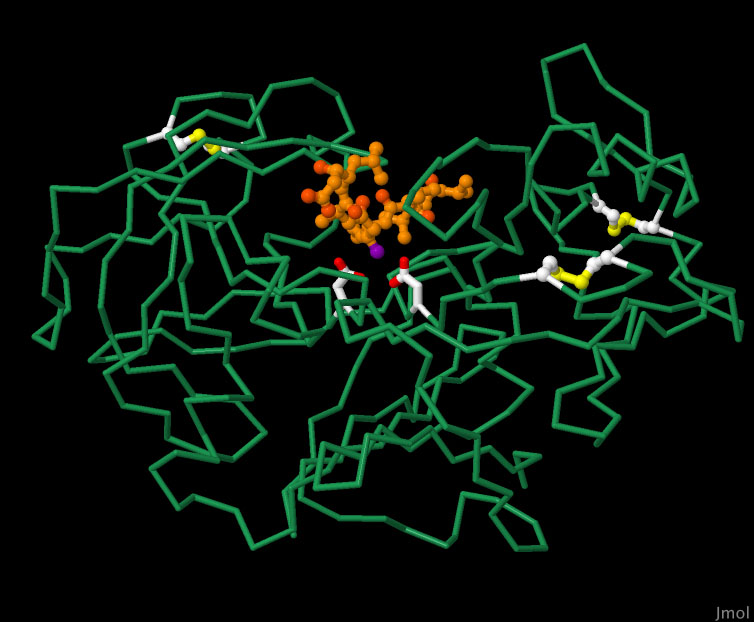 Pepsin (PDB entry 1pso) uses a pair of aspartate residues to perform the protein cleavage reaction, shown here with red oxygen atoms. In an example of parallel evolution (where two organisms independently develop the same method for solving a problem), the mechanism is similar to that used by HIV protease. This structure also includes a non-cleavable inhibitor in the active site (shown in orange). It contains a hydroxyl group, shown here in purple, that mimics the place that water attaches during the cleavage reaction. Three crosslinks that strengthen the folded protein are also shown, formed between sulfur atoms (yellow) in cysteine. To explore this structure in more detail, click on the image for an interactive JSmol.

doi:10.2210/rcsb_pdb/mom_2000_12
About Molecule of the Month
The RCSB PDB Molecule of the Month by David S. Goodsell (The Scripps Research Institute and the RCSB PDB) presents short accounts on selected molecules from the Protein Data Bank. Each installment includes an introduction to the structure and function of the molecule, a discussion of the relevance of the molecule to human health and welfare, and suggestions for how visitors might view these structures and access further details.More