Molecule of the Month: Tetrahydrobiopterin Biosynthesis

Tetrahydrobiopterin plays an essential role in the production of aromatic amino acids, neurotransmitters and nitric oxide.

Enzymes that perform unusual chemical reactions often need some assistance. The twenty natural amino acids have many different chemical properties that may be used to catalyze chemical reactions, but sometimes amino acids just aren't enough. In these cases, cofactors with special chemical properties provide the necessary chemical expertise and enzymes use them as tiny tools to perform their reactions. For instance, tetrahydrobiopterin is a cofactor used by several enzymes that juggle molecular oxygen, attaching it to amino acids and other molecules.

Three enzymes build tetrahydrobiopterin starting from GTP. The first step, which is the committing step for the whole process, is performed by a large enzyme complex called GTP cyclohydrolase I (GTPCH, shown here from PDB entry 1gtp ). It breaks the smaller ring in the guanine base, opens up the sugar, and reconnects everything to form a slightly larger ring. In the second step, the enzyme 6-pyruvoyl-tetrahydropterin synthase (PTPS, PDB entry 1gtq ) swaps a few atoms around in the ring and clips off the phosphates. Finally, the enzyme sepiapterin reductase (SR, PDB entry 1sep ) cleans up the portion of the sugar that is left to form the final cofactor.

Enzymes that require tetrahydrobiopterin are important for the production of amino acids, but perhaps their most visible role is in the production of neurotransmitters. Phenylalanine hydroxylase and tyrosine hydroxylase create the raw material for building dopamine, which in turn is the building block for making epinephrine (adrenaline) and norepinephrine. Tetrahydrobiopterin is also used by nitric oxide synthase, which builds nitric oxide gas that is widely used in the body as a hormone. If the enzymes that build tetrahydrobiopterin are missing or mutated, these functions will be compromised and can cause severe problems with the nervous system and cardiovascular system. Fortunately, people with these problems can be treated with compounds like L-dopa, which are normally made by tetrahydrobiopterin-dependent enzymes.

When used as a cofactor, tetrahydrobiopterin grabs molecular oxygen and attaches one oxygen atom to the target molecule, but it ends up having the other oxygen attached to itself in the process. Two enzymes are then needed to strip off this unwanted oxygen and restore the cofactor. The first, pterin-4a-carbinolamine dehydratase (PCD, PDB entry 1dcp ), strips off the oxygen and releases it as a water molecule. The second, dihydropteridine reductase (DHPR, PDB entry 1dhr ), adds a few hydrogen atoms and the cofactor is ready to go for the next reaction. 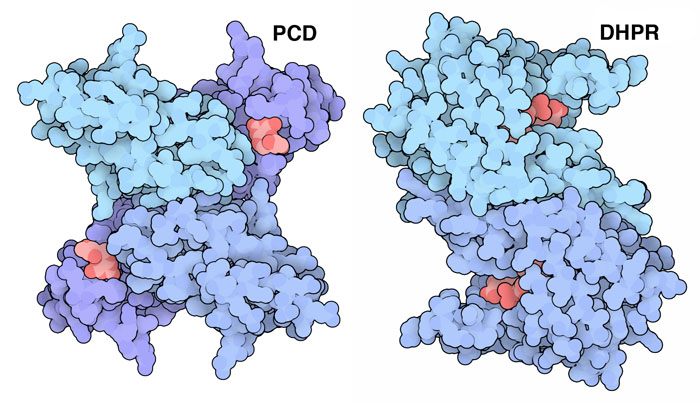 Two enzymes regenerate tetrahydrobiopterin after it is used as a cofactor.
Download high quality TIFF image

A recent crystallographic analysis revealed the structural basis for side effects caused by sulfa drugs. These drugs revolutionized medicine in the 1930s, being one of the first effective antibiotics for fighting bacterial infections. However, they show some side effects with the nervous system when used at high doses. A recent structure (PDB entry 4j7u ), revealed that the drugs bind to sepiapterin reductase, blocking its action and ultimately blocking the production of neurotransmitters. To explore the structure of a sulfa drug bound to this enzyme, as well as the structure of the enzyme with its intended substrate (PDB entry 1sep ), click the image for an interactive JSmol.

doi:10.2210/rcsb_pdb/mom_2015_8
About Molecule of the Month
The RCSB PDB Molecule of the Month by David S. Goodsell (The Scripps Research Institute and the RCSB PDB) presents short accounts on selected molecules from the Protein Data Bank. Each installment includes an introduction to the structure and function of the molecule, a discussion of the relevance of the molecule to human health and welfare, and suggestions for how visitors might view these structures and access further details.More