Tissue transglutaminase staples proteins together by forming a chemical crosslink. 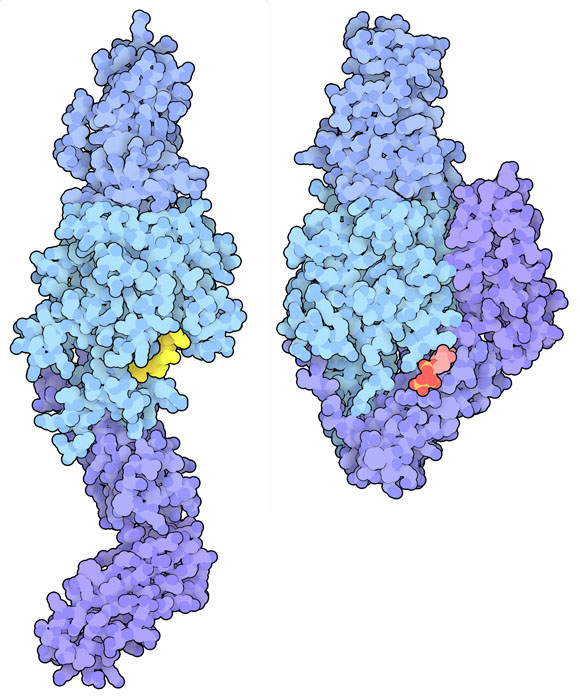 Tissue transglutaminase in the active (left) and GTP-bound inactive (right) conformations. An inhibitor that mimics gluten is shown in yellow and GTP is shown in red.
Download high quality TIFF image
Tissues of our body, such as skin, muscle and hair, need to have the distinctive properties to suit their function, such as elasticity, strength, and resilience. These types of properties are tuned by crosslinking specific proteins to form a network that can withstand chemical degradation or mechanical stress. Cells use transglutaminases to form these specific crosslinks between proteins. For example, keratinocyte transglutaminase works with several other transglutaminases to form highly crosslinked networks that provide strength to skin, hair and nails. Tissue transglutaminase takes a gentler approach to strengthen interactions of proteins involved in the cytoskeleton and cellular adhesion.

Tissue transglutaminase, also known as transglutaminase 2, is a protein stapler that links two proteins together. In its active conformation (shown here from PDB entry 2q3z), it has enough room to bind to two proteins. The enzyme then aligns a glutamine on one protein with a lysine on the other and chemically joins the tips of the two side chains. The resulting covalent bond is similar to the peptide bond found in protein backbones. When this stapling function is not required, several allosteric mechanisms are used to inactivate transglutaminase. For example, binding of GTP folds the enzyme into a compact, inactive form, as shown here from PDB entry 3ly6.

Transglutaminases play essential roles in most of our cells, but they’ve also become indispensable tools in biotechnology, with applications ranging from cosmetics to the food industry. For example, a small bacterial transglutaminase is used to improve the texture of imitation crabmeat, hot dogs, sausages, and many other meat products. Widespread use of transglutaminase has also inspired the creativity of chefs, allowing them to do fanciful things such as making pasta from shrimp. They add powdered transglutaminase to the meat mixture, wrap the whole thing tightly in plastic wrap, and let that ferment until the desired consistency is reached. 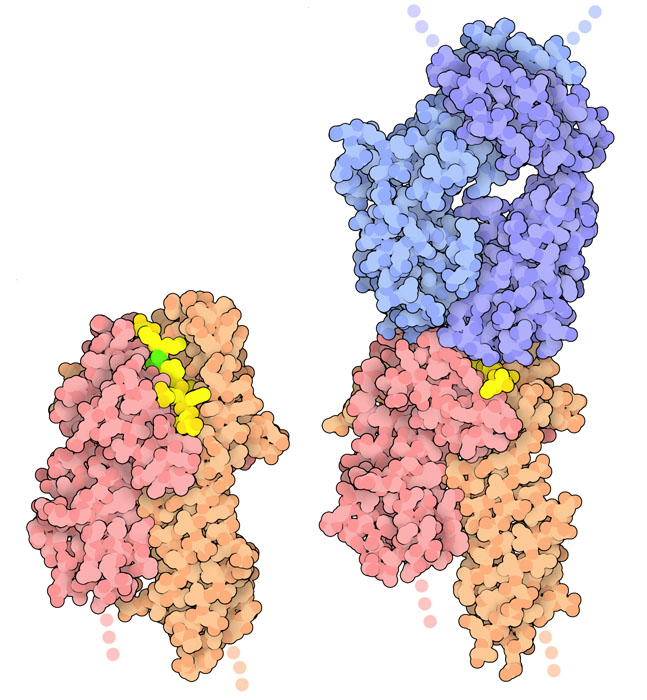 Tissue transglutaminase also performs a slightly different reaction on single proteins, removing a molecule of ammonia from glutamine to form glutamic acid. This deamination reaction has been linked to celiac disease, a common inflammatory disorder that damages the small intestine and causes a variety of debilitating symptoms. Celiac disease is particularly prevalent in Western countries that are major consumers of foods containing gluten, a mixture of proteins found in wheat and grains. Gluten is rich in glutamine, and tissue transglutaminase in the digestive system converts some of this glutamine to glutamic acid. Patients with celiac disease have special MHC proteins (known as HLA-DQ2 or DQ8) in the mucosa of their small intestine that recognize the deaminated gluten and incorrectly treat it as a danger, launching an inappropriate immune response. PDB entry 1s9v shows a deaminated gluten peptide being displayed by HLA-DQ2, and PDB entry 5ks9 shows how the a gluten/HLA-DQ8 complex is recognized by a T-cell receptor isolated from a celiac disease patient. Although many aspects of celiac disease are still not fully understood, including the mechanism of transglutaminase activation, researchers are studying the structures of both the transglutaminase and the HLA/gluten/TCR complex as possible targets for medical intervention. 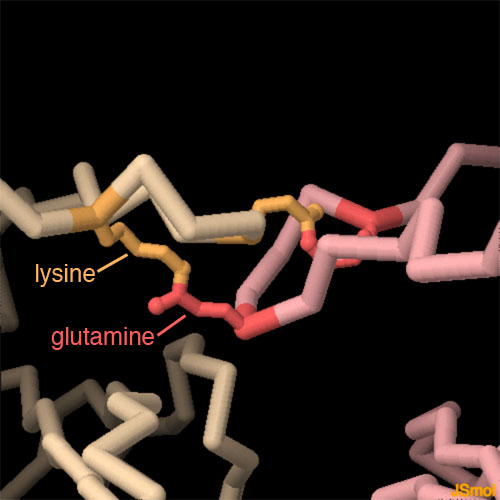 Factor XIII is a transglutaminase that crosslinks fibrin in blood clots, forming an insoluble network that blocks blood loss at wounds. PDB entry 1n73) includes the ends of two molecules of lamprey fibrin, which assemble head-to-head in the fibrin fiber and is made even stronger by two crosslinks between lysine and glutamine. This network is so strong that another enzyme, plasmin, is needed to chop up the fibrin proteins as the wound heals. To explore this crosslinked structure in more detail, click on the image for an interactive JSmol.

doi:10.2210/rcsb_pdb/mom_2017_5
About Molecule of the Month
The RCSB PDB Molecule of the Month by David S. Goodsell (The Scripps Research Institute and the RCSB PDB) presents short accounts on selected molecules from the Protein Data Bank. Each installment includes an introduction to the structure and function of the molecule, a discussion of the relevance of the molecule to human health and welfare, and suggestions for how visitors might view these structures and access further details.More