Mechanosensitive ion channels give our cells a sense of touch. 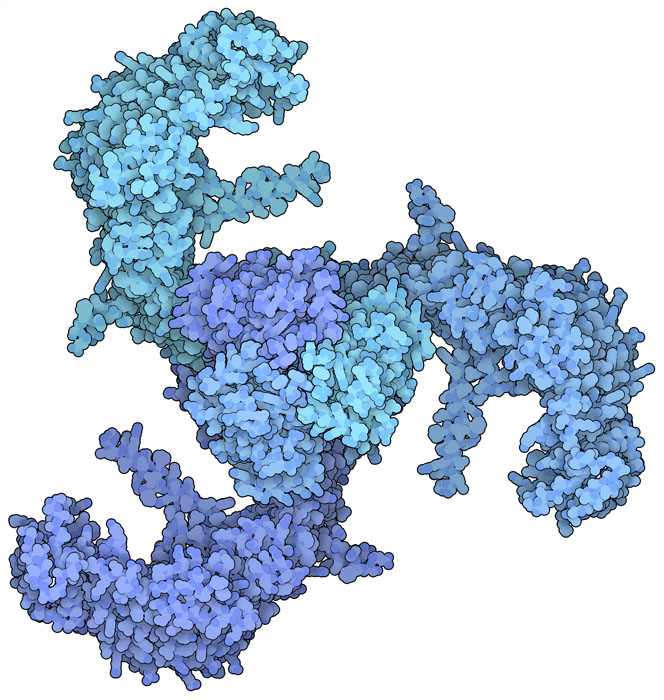 Piezo1, viewed from the inside of the cell.
Download high quality TIFF image
Our senses rely on molecular machines that monitor the environment and generate a signal when something interesting happens. For things like taste, this is fairly straight-forward: taste sensors just need to recognize characteristic molecules that we eat, like sour acids or sweet sugars. Touch, however, is much trickier. For that, the sensor needs to monitor the shape of a cell surface. Several recent structures are revealing how this is accomplished in cells.

Two similar Piezo proteins give our cells a sense of touch. Piezo2 is found in sensory neurons, where it controls gentle touch sensations. Piezo1, on the other hand, is found in non-sensory tissues, where it helps cells sense local changes in fluid pressure. This is important, for example, in processes like blood flow, and also helps give us our ongoing feeling for how all our limbs are positioned. Changes in the tension of membranes cause these Piezo proteins to open up and allow positively-charged ions like calcium to enter the cell. This change in ion concentration triggers the sensory response of the cell.

Piezo1 in the Microscope

Structures have recently been determined for Piezo1 using cryoelectron microscopy: a low-resolution structure was determined in 2015 (PDB entry 3jac) and three more detailed structures have just been released (PDB entries 6b3r, 6bpz, 5z10). They all reveal a complex molecular machine composed of three identical protein subunits. The subunits come together in the center to form a membrane-spanning ion channel, and three curving blades extend away from the channel. The blades are thought to probe the state of the surrounding membrane, opening the channel when the membrane is distorted.

Piezo proteins are essential in regulating many physiological processes, so embryos with inactive Piezo proteins do not survive long during development. However, a mutant form of Piezo1 protein can have an unusual, beneficial effect. These mutant channels are more active than usual and allow excess calcium to enter red blood cells. This has a domino effect on other channels and ultimately leads to dehydration of the cell. Normally this would be a problem, but in areas of the world plagued with malaria, the mutation is very common because the dehydrated cells are resistant to the malaria parasite. 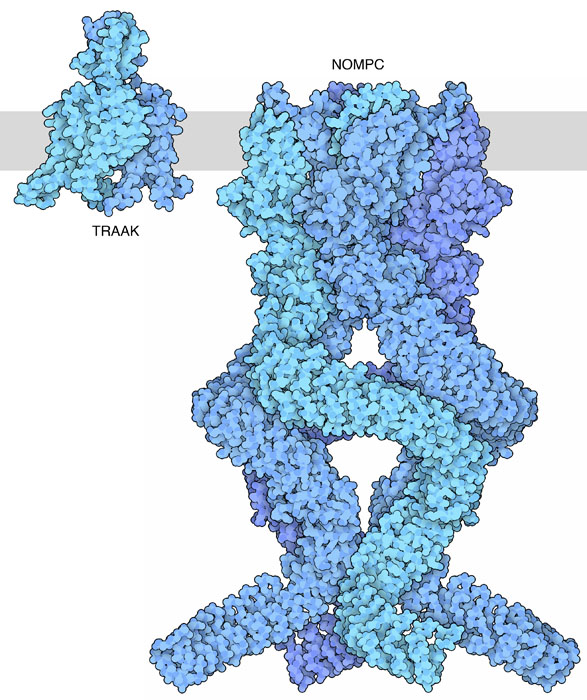 Two mechanosensitive ion channels. The membrane is shown schematically in gray, with the inside of the cell at the bottom.
Download high quality TIFF image

Bacteria have several small mechanosensitive channels, and higher organisms also have other options for sensing changes in cellular shape. Two are shown here. TRAAK (PDB entry 3um7) is a potassium channel that is triggered by tension in the membrane and also by temperature. NOMPC (PDB entry 5vkq) is thought to be tethered to microtubules through its long, spring-shaped domains, opening when it senses motions in the cytoskeleton. 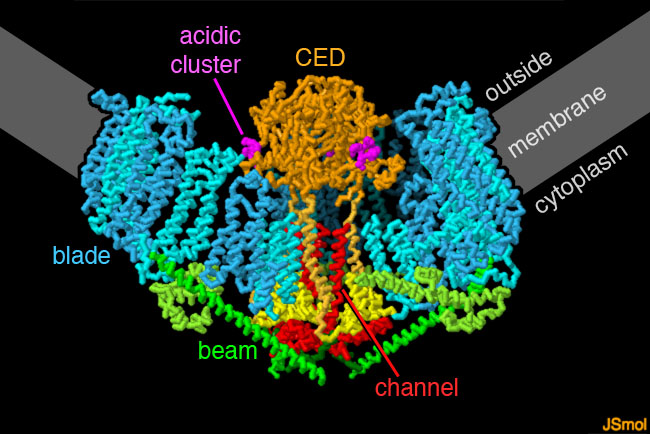 The Piezo1 structures reveal many functional domains within the long protein chains. The blades (blue) are composed of a series of similar domains that are embedded in the membrane. As you can see in the structure, the blades are not flat, but instead bend the membrane into a cup shape. A cluster of acidic amino acids (magenta) in the CED domain (orange) is though to help manage access of calcium ions to the central channel, which is surrounded by three helices (red). A beam (green) connects the blades and the channel, presumably linking changes in the shapes of the blades to opening of the channel. To explore this structure in more detail, click on the image for an interative JSmol.

doi:10.2210/rcsb_pdb/mom_2018_7
About Molecule of the Month
The RCSB PDB Molecule of the Month by David S. Goodsell (The Scripps Research Institute and the RCSB PDB) presents short accounts on selected molecules from the Protein Data Bank. Each installment includes an introduction to the structure and function of the molecule, a discussion of the relevance of the molecule to human health and welfare, and suggestions for how visitors might view these structures and access further details.More