Molecule of the Month: Telomerase

Telomerase maintains the ends of our chromosomes. 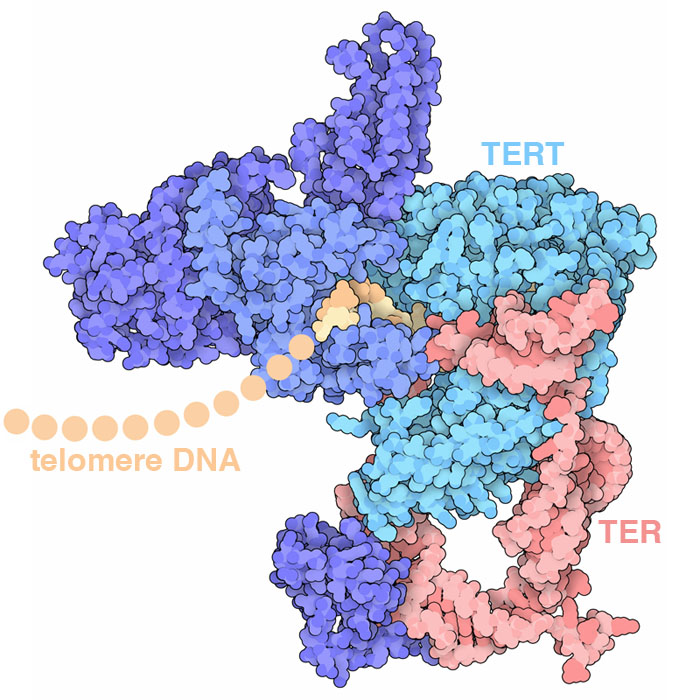 This structure of the telomere core includes a reverse transcriptase (TERT) and associated proteins, an RNA template (TER), and a short piece of the telomere DNA.
Download high quality TIFF image
Our cells must face a tricky problem: our machinery for DNA replication is not able to copy DNA strands to their very ends. Bacteria solve this problem in a simple way: their chromosomes are circular, so there aren’t any ends to cause problems. But complex eukaryotic cells store their genetic information in linear DNA strands, perhaps because it allows easier shuffling of genes during meiosis. So, they need a special mechanism to make sure the chromosomes don’t get shorter every time the cell divides.

The ends of our chromosomes are protected by a unique structure, called a telomere, composed of DNA and proteins. Telomeric DNA includes about a thousand repeats of the short sequence TTAGGG. Most of these repeated segments are paired with a complementary DNA strand to form a normal double helix, but several hundred nucleotides at the end are a single strand that is thought to loop back and interact with the double-stranded region. Several different types of proteins, collectively called “shelterin,” coat this telomeric DNA, protecting it.

Telomerase is most active during development of embryos, when cells divide many times to create our entire body. Later in life, it is far less active in most cells, and telomeres gradually shorten as we age. Improper regulation of telomerase, however, can cause serious problems. For example, cancer cells very often have mutations that lead to production of higher levels of telomerase. This allows them to maintain their telomeres as they rapidly divide and form a tumor. 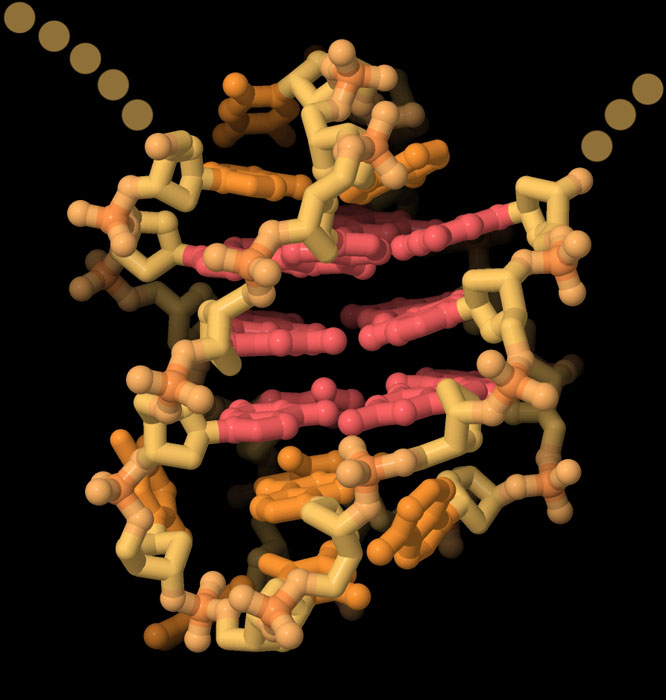 Structural biologists discovered that the guanine-rich sequence of telomeres can form an unusual structure. Four guanines come together to form a quadruplex structure. As seen in PDB entry 143d, a DNA strand with four telomere repeats can form a tight little knot, with the G-quadruplexes tucked inside. 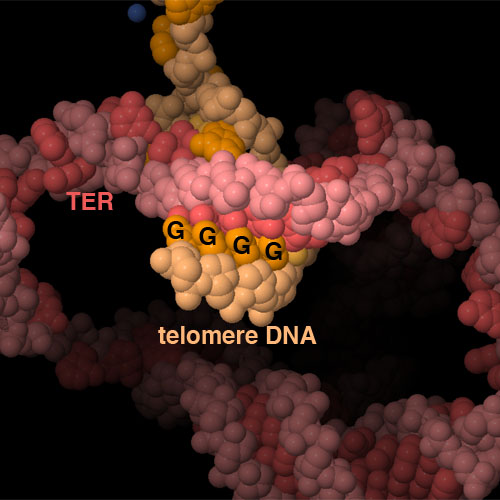 Telomerase is a highly dynamic complex that has been difficult to study. The structure of the catalytic core of telomerase was determined using cryo-electron tomography by using modified DNA nucleotides to lock the structure into a stable form that could be observed. The structure includes the template RNA (pink), the reverse transcriptase and several associated proteins (not shown here), and a short piece of the end of a DNA telomere (orange). This telomerase is from a protozoan, with telomeres that are slightly different than ours, with sequence TTGGGG. To explore this structure in more detail, click on the image for an interactive JSmol.

doi:10.2210/rcsb_pdb/mom_2018_11
About Molecule of the Month
The RCSB PDB Molecule of the Month by David S. Goodsell (The Scripps Research Institute and the RCSB PDB) presents short accounts on selected molecules from the Protein Data Bank. Each installment includes an introduction to the structure and function of the molecule, a discussion of the relevance of the molecule to human health and welfare, and suggestions for how visitors might view these structures and access further details.More