Structures of hepatitis C viral proteins have led to the discovery of direct-acting antivirals. 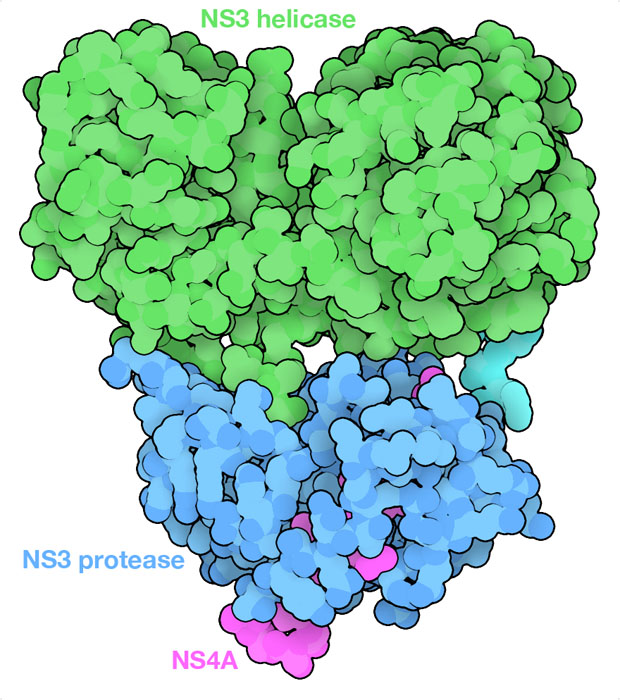 HCV protease/helicase NS3/4A. The protease domain is shown in blue, the helicase domain is in green, and NS4A is in magenta.
Download high quality TIFF image
Enemies that are known are easier to fight. The discovery of hepatitis C virus in 1989 is a perfect example of how scientific knowledge can be translated into clinical success. Before then, blood transfusions carried a significant risk of causing hepatitis, a chronic disease that can cause severe liver damage and cancer. But with discovery of the agent that causes the disease, blood may now be screened for presence of the virus. Also, new therapies have been discovered to fight the virus in infected patients, and for the first time, a chronic infection may now be cured with drugs. This remarkable success of translational research was recognized by the 2020 Nobel Prize in Physiology or Medicine, awarded to H. J. Alter, M. Houghton, and C. M. Rice.

Like many RNA viruses, hepatitis C virus (HCV) hijacks cellular ribosomes and forces them to make a long viral polyprotein, which must then be clipped into functional pieces by a viral protease (for other examples, see HIV protease and coronavirus proteases). Since these proteases have a central function in the viral life cycle, they are effective targets for antiviral drugs. As shown in the interactive view below, researchers have progressively refined inhibitors for HCV protease, so today, there are powerful "direct-acting antivirals" (DAA) that block growth of the virus and cure infected individuals. This cure is an enormous boon for global health, since it has been estimated that 3% of the world population is infected with HCV, and HCV is the leading cause of liver transplantation in the United States.

HCV protease is a serine protease similar to chymotrypsin, which is built as part of a longer protein that also includes a helicase enzyme that is involved in replication of the viral RNA genome. This composite protein is collectively called NS3 (non-structural protein 3), shown here from PDB entry 1cu1. The protease/helicase also binds to another small viral protein, called NS4A, which is needed for maximal function of the protease and also tethers the complex to cellular membranes. 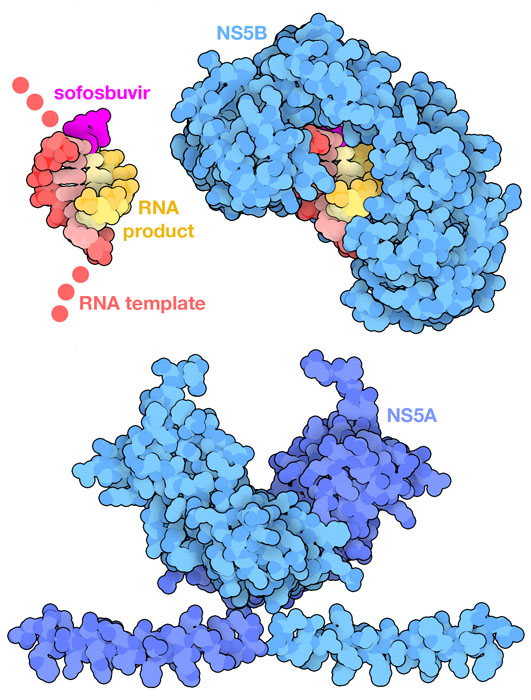 Researchers have also targeted other HCV proteins with direct-acting antiviral drugs. As with SARS-CoV-2, HCV has an RNA genome that is replicated by an RNA-dependent RNA polymerase, shown here from PDB entry 4wtg. This structure includes the antiviral drug sofosbuvir targeting the polymerase. Effective antiviral drugs have also been developed for NS5A, a membrane-bound protein that plays essential supporting roles in viral RNA replication and virus assembly (PDB entries 1zh1 and 1r7g). These drugs are thought to inhibit the dimerization of the protein, blocking its function. 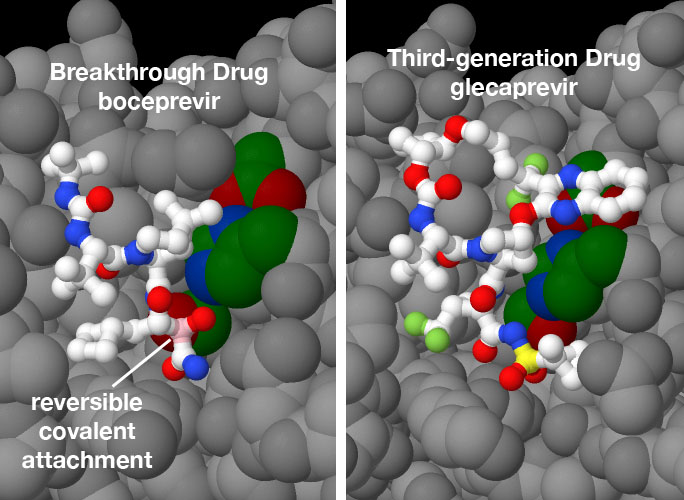 The active site of the HCV protease is a tricky target, because it doesn't have a deep pocket like many other enzyme active sites. Medicinal chemists have overcome this challenge in two ways. Early breakthrough antivirals boceprevir and telaprevir (PDB entries 2oc8 and 3sv6) form a reversible covalent bond with the active site serine amino acid, helping to lock the drug to the surface of the enzyme. Unfortunately, these have unwelcome side effects. Later generation drugs such as grazoprevir, glecaprevir, and voxilaprevir (PDB entries 3sue, 6p6l, and 6nzt), which are now in widespread use, have a large cyclic structure that grips the protein surface. To explore these structures in more detail, click on the image for an interactive JSmol.

doi:10.2210/rcsb_pdb/mom_2020_12
About Molecule of the Month
The RCSB PDB Molecule of the Month by David S. Goodsell (The Scripps Research Institute and the RCSB PDB) presents short accounts on selected molecules from the Protein Data Bank. Each installment includes an introduction to the structure and function of the molecule, a discussion of the relevance of the molecule to human health and welfare, and suggestions for how visitors might view these structures and access further details.More