Molecule of the Month: Beta-secretase

Beta-Secretase. The membrane spanning portion, which is not included in the structures, is shown schematically.
Download high quality TIFF image
Many of our proteins need to be shaped, folded and trimmed after they are made, to coax them into their proper functional form. A variety of specialized chaperones and proteases perform these tasks. Occasionally, however, these chaperones and proteases make mistakes that can have life-threatening consequences.

Beta-secretase, also known as BACE1 or memapsin-2, is a protease that makes specific cuts during the maturation of some protein chains. It is normally found in the endoplasmic reticulum and the Golgi, where it trims a few proteins that are particularly important in neural function. These include neuregulin, a protein that helps control the formation of myelin sheaths around nerve axons, and voltage-gated sodium channels, which are important for the transmission of nerve signals.

Beta-secretase is very similar to the digestive protease pepsin. Like pepsin, it has a deep active site cleft that grips protein chains, and a pair of aspartate amino acids that make the cut. Beta-secretase is different, however, in that it has a long tail that tethers the enzyme to the membrane surface. This tail localizes the enzyme in the proper place, so that it doesn't float freely through the cell and wreak havoc on other proteins. Two structures in the PDB show two portions of the enzyme: 1sgz (at the top) is the catalytic domain that cleaves proteins, and 1py1 contains a small portion of the chain on the other side of the membrane (at the bottom) which is important for regulating the activity of the enzyme and directing it towards the proper site in the cell.

Performing a Job Too Well

Unfortunately, beta-secretase has a dark side as well. It makes a specific cut in the amyloid-beta precursor protein, breaking the protein chain and releasing a large portion of it. Then, a second protease makes another cut, and a tiny but dangerous peptide is formed. In small amounts, this peptide is important for normal synaptic function. However, if beta-secretase is overactive, the peptide builds up and can aggregate into tangled amyloid fibers. If these fibers form in nerve cells, they block nerve transmission and may lead to Alzheimer's disease. This connection to Alzheimer's disease has made beta-secretase into one of the most studied enzymes in the fight against the disease. 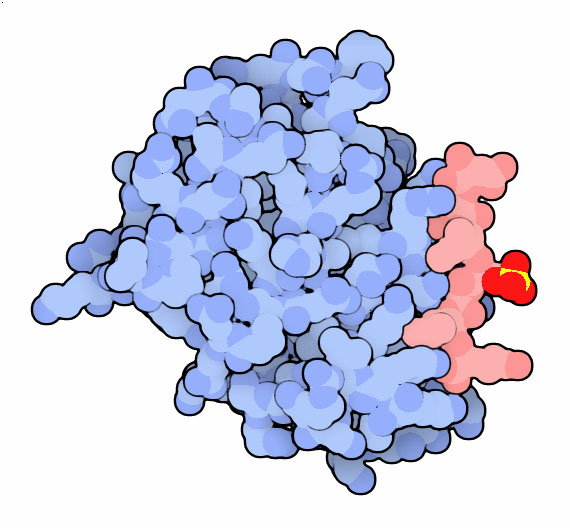 Getting to the Right Place

The tail of beta-secretase (shown in pink) controls the location of the enzyme inside the cell. It binds to proteins that control the traffic of proteins between the endoplasmic reticulum, Golgi, and cell surface, such as GGA, shown here in blue from PDB entry 1py1 . This short tail is phosphorylated (bright red and yellow atoms) to help control its association with the proteins that orchestrate this motion through the cell. 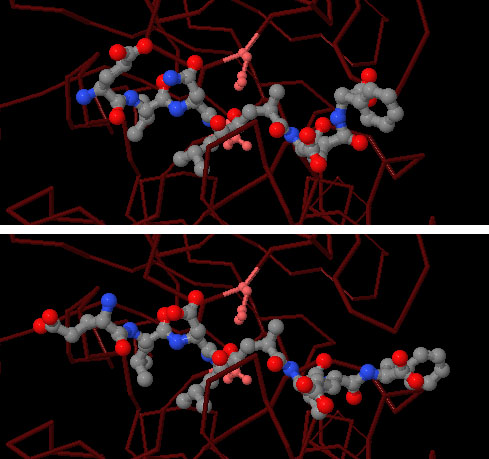 Since beta-secretase is so important for the development of Alzheimer's disease, many laboratories have been working hard to find inhibitors to block it. The first success is shown at the top here from PDB entry 1fkn , and an improved compound that binds much more tightly is shown at the bottom from PDB entry 1m4h . Structures of many other drug candidates may be found in the PDB. Unfortunately, these compounds are not efficiently transported from the blood to the brain, so they have not been particularly useful as drugs to fight Alzheimer's disease. But the search continues in the fight against this debilitating disease.

doi:10.2210/rcsb_pdb/mom_2009_7
About Molecule of the Month
The RCSB PDB Molecule of the Month by David S. Goodsell (The Scripps Research Institute and the RCSB PDB) presents short accounts on selected molecules from the Protein Data Bank. Each installment includes an introduction to the structure and function of the molecule, a discussion of the relevance of the molecule to human health and welfare, and suggestions for how visitors might view these structures and access further details.More